A Speedrunner Just Beat Ocarina of Time in 18 Minutes

by Patrick Klepek on July 21, 2014
Share:TwitterFacebookReddit

Even crazier, the world record that Cosmo Wright surpassed was his own world record from a little while back.

It probably took me more than 20 hours to finish The Legend of Zelda: Ocarina of Time when I was a kid. This weekend, it took speedrunner Cosmo Wright exactly 18 minutes and 10 seconds to see the credits.

As someone who moves from one game to the next rather quickly, speedrunning fascinates me. What drives a player to jump back into the same game over and over, trying to perfect every dash, slash, and exploit? My assumption is a sense of power derived from breaking a game in ways never intended, and the respect that comes with being "the best" at a game not traditionally viewed as competitive.

Rather than just speculating, though, I'll have to report back with more information later.

@cosmowright Hey, would you mind dropping me an email? Just realized we're both in Chicago, and I'd love to chat about your work sometime!

Filed under:
The Legend of Zelda: Ocarina of Time
Speedrun 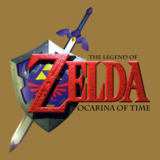 The Legend of Zelda: Ocarina of Time

The first 3D Legend of Zelda game, Ocarina of Time was created for the Nintendo 64 in 1998 and introduced innovative mechanics such as Z-targeting as well as many of the series' other trademarks. It has frequently been ranked as the greatest game of all time by many publications.