According to a Cake, Catherine Sold 200,000 Units its First Week

by Alex Navarro on August 4, 2011
Share:TwitterFacebookReddit

Atlus tweets out a shot of its celebratory cake, and gives up the opening week numbers in the process.

Whenever I have a conversation with someone about Atlus and the games the notoriously niche publisher puts out, the conversation always devolves into some permutation of, "Yeah, but how do they make money?" For as great as many of Atlus' titles are, the company almost exclusively deals in oddball Japanese role-playing nonsense that treads pretty far off the beaten (mostly beaten by Square Enix) path of games that American audiences acknowledge the existence of, let alone actively want to play.

After reading today's news that Catherine, the Q*Bert-meets-anime/mumblecore (animumblecore?) game Atlus mostly recently brought to American audiences, sold 200,000 units in its first week of retail, I may have to stop asking that question. Now, to be fair, this information comes from Atlus' Twitter feed, and specifically from a picture of a cake. In celebration of the milestone, this cake had the sales numbers emblazoned in icing for all to see.

Unfortunately, as we all know, cakes are by far the most unreliable of all dessert treats, known for providing consistently apocryphal information and constantly double-dealing for the pursuit of their own nefarious gains. Perhaps if this information had come on some manner of pie, or spelled out in chocolate chip cookies, then we could rely upon it. But a cake? They're like the Robert Ford of desserts.

Seriously though, whatever you may have taken away from the experience of Catherine, it's always good to see games outside the mainstream norm of "shoot that guy" and "stab that dude" find success. Given the massive retail disappointments that were Child of Eden and Shadows of the Damned, this does at least give us some hope that Japanese weirdness can still succeed in America. Especially if there's marketing for it. 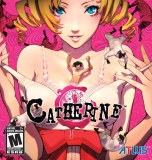 The first game developed by Atlus for the PS3/Xbox 360. Made by the Persona Team, The game is an "adult oriented" action-adventure/horror game with puzzle platforming stages.