by Brad Shoemaker on September 25, 2009
Share:TwitterFacebookReddit

Here's a quick tease of the guys who will be making your life miserable in the back half of Gearbox's swell-lookin' loot shooter.

We've been looking pretty intently at Borderlands around here for the last few weeks, leveling up and amassing a disturbing amount of loot as we go. But today we've gotten word that the stuff we've been playing comprises only a portion of the game world and the enemies you'll face. Gearbox would like you to know that there's more to Borderlands than the company has shown to date.

Here's an example. There's a more sinister, organized group of antagonists at work in the game's world of Pandora than you've seen in all the trailers and hands-on reports so far. Come on, you didn't think you'd be fighting skags and bandits all the way up to level 50, did you? Here's a quote from Gearbox head honcho Randy Pitchford, a man whose enthusiasm for his games is a genuine inspiration to us all.

So, Borderlands is pretty damn huge. How huge? We're talking 60+ hours of questing available to the player in just the first playthrough. But the thing is, all of those screenshots and trailer footage have just been showing the noobie areas of the game. You haven't even met the real bad guys yet in Borderlands; the content past level 15.

We've been trying really hard to hold things back and not reveal too much and spoil most of the game. Yes, it has been mentioned that Borderlands has other environments in the game like snowy mountaintops and the military installations, but we arent showing it! Remember all of those movie trailers you've seen that give away all the best stuff and the whole damn story before you're even at the theater? Yeah, we think that sucks too.

We are just a few short weeks away from release and we want to assure gamers there is way more to Borderlands. A lot more. So to get that point across here is just a tiny little tease and screenshot.

OK, so that's what these guys look like. (Full-size image here.) But I wanted a little more info, which Pitchford was charactieristically happy to provide.

Who are the Crimson Lance? What are their aims and what motivates them?

Pitchford: As we started showing Borderlands to the world, we really focused on just a slice of the game that really placed it with its influences and intent – the arid but vibrant, science fiction world of Pandora that invokes thought of influences from Mad Max to Deadwood to Firefly to Tank Girl.  From the bandit enemies to the voracious wildlife, even the denizens of Pandora that we have shown thus far have sort of set the table with this feeling of a wild, gritty and evocative, but also pure and authentic aesthetic.

The Crimson Lance are just one of the many things in Borderlands that we have NOT shown so far that sort of pull the table cloth out from under all of that.

To be more clear, the Crimson Lance are the private army of the Atlas Corporation – the most wealthy and powerful of the mega corps of this universe. The Atlas Corporation rose to the top because they were the first to discover, reverse engineer and exploit a few pieces of burned and broken alien technology that they discovered from an ancient crash site. The inventions that came from the exploitation of this technology is what is behind many of the miraculous, high-tech things you can do in Borderlands – like digitally materialize a custom painted vehicle using a transportation fabrication station.

Anyway – the Lance are kind of badass. They’re the well equipped, professional soldiers.

Any relation to that holographic lady from the game's tutorial?

Pitchford: So – you’ve played the preview code, then?  I don’t want to give any spoilers away by talking much about that – not that story is very heavy in the game. In fact, with Borderlands we have HEAVILY prioritized game play and action and made sure that the story is there to enable that and not get in the way of that. There is story and purpose and plot, of course, but we push that stuff to the background as much as possible and not force story down your throat. I PROMISE there is only, like, less than five minutes or so of cutscenes at the beginning to set things up and only another cutscene or two in the middle and at the end and that the value is in the actual game play. I PROMISE there won’t be a single flow-chart dialogue tree kind of thing in the game. I PROMISE that when we have story elements to offer you, that the game will put that stuff up in the corner with voice over driving it so that you can stop and pay attention if you want, or just keep on playing and doing whatever you want instead.

What were we talking about? Oh yeah – the Crimson Lance!

They’re badasses. And they have great gear. Don’t let them kill you. When you’re tough enough, kill them and take their guns – that’s what I do.

Are the Lance the only organized, militaristic force in the game? Or are there other factions working with or against you?

Pitchford: I don’t want to spoil anything, so I won’t give too many details, but there are other factions working with and against you as you get closer to your goal of discovering and claiming “the Vault.”  We’re currently debating whether or not we show some glimpses of some of this content before we launch because right now we’ve really not shown anything about how big and varied the game feels when you’ve seen and done it all. But we also know that there’s a lot of value in discovery when you’re playing the game and we don’t want to risk diminishing any of that for anyone. Discovery is a really important key word that drove a lot of our thinking in the design of Borderlands – along with growth and choice.

What kind of combat tactics/AI differences will we see from these guys? I'm assuming they're a little more organized than a bunch of skags.

Pitchford: The Crimson Lance have great equipment and weapons and they have some training. They will take a knee to be able to fire with better accuracy. They’ll use cover effectively and use their environment more tactically. This is a very big contrast from, say, the typical mutant bandit which might just run at you screaming wildly.

Pitchford: Yes. These guys have some of the best equipment in the game. When you start encountering the Crimson Lance in Borderlands, you’ll likely both feel a little nervous and excited at the same time. You’ll be nervous about how tough and effective they are and the new challenges they bring to the game play, but you’ll also be excited by those surprises and by the promise of the rewards you can gain if you can develop the skills and techniques to take them down.

The Crimson Lance, as the private army of Atlas Corp, do have the best gear of any humans in the universe, so you’ll definitely want to get your hands on that stuff whenever you can.

But, on Pandora, there is still even better gear.

Thanks for the info, Randy. 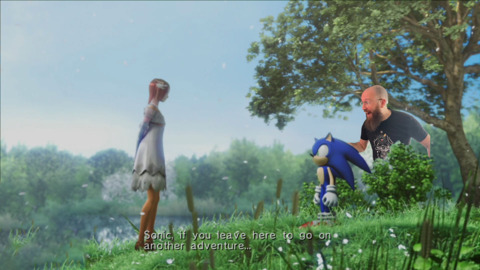