by Drew Scanlon on December 26, 2018
Share:TwitterFacebookReddit

Clothmap host Drew Scanlon takes us through the games he made time for amid his travels in 2018.

Drew Scanlon is a former Giant Bomb video producer and current racecar nerd. When he’s not murdering androids for the kids, you can find him over at Cloth Map.

Hey everybody! As usual, my list of games is kind of all over the place. Having a weird travel schedule means that this year I’ve tended to favor shorter games, mobile games, and the kinds of games you can easily hop back into. Trying to play a long game with interruptions is like, say, an android that keeps dying over and over and everyone has to keep catching it up on what’s happening. But just like a certain tenacious police robot, that hasn’t stopped me from finding some top-shelf interactive video entertainment software in 2018!

It has always felt to me that F1 games have relied, to some degree, on your fandom of real Formula 1 for you to have any fun in the game. “Hey, want to drive cars and tracks that look like the ones on TV? Here’s that. And only that.” F1 2018 is different. In short, the game does the best job I’ve seen of simulating not only wheels-on-track F1 driving, but the actual moment-to-moment job of a professional racing driver. This includes dialogue-tree on-camera interview sessions which actually impact your car’s development (“your aero department will remember that”) and more nuance to the many, many systems that are present on modern F1 cars. You’d probably still have to be a bit of a gearhead to really latch onto F1 2018, but at least it feels like there’s something here instead of the usual empty race suit.

I have a small crew of people I play games with over the Internet, and it can often be tough to find just the right game to play. Destiny 2 kept us busy for a while, but we quickly became out of sync with each other as individual players leveled up outside our group play sessions. The key to a perfect game for us is low overhead: we just want to be able to jump in and have a good time. This is Sea of Thieves in a nutshell. It feels like the designers took a bullet-point list of “cool stuff that pirates do” and made each one of those as fun as possible. Who cares if it doesn’t fit together in a balanced way? We’re pirates!

You know what’s a good game? SIM. CITY. And as it turns out, that formula can work pretty well on telephones if you do it right, which Pocket City absolutely does. And while we’re talking about doing things right, I think the official App Store description has since changed, but the full title of the game used to actually be something like “Pocket City: A City Building Game Without Microtransactions.” Say no more. The game didn’t have as much staying power for me as the other mobile games on this list, but I applaud the success of bringing one of the greatest games of all time to the device I always have with me.

7. Return of the Obra Dinn

Judging by my “score” at the end of the game, I am apparently not very good at Return of the Obra Dinn. But BOY does that game have some cool stuff going on. Obra Dinn does things with its monochrome palette I didn’t think possible, and marries its visuals with some tremendous musical cues to create an atmosphere that is tough to forget. The game also meters out its fantastical story in such a smart way that I played through the whole game in one sitting (which is rare for me). Again, I struggled with the “game” part of Obra Dinn, but as a piece of art, it’s amazing.

Forza Horizon 4 is the closest thing I’ve played to Burnout Paradise that wasn't just Burnout Paradise. The only reason it isn’t higher is that I haven’t had a chance to play more of it!

I know. Trust me, I know. Detroit is exactly as tone-deaf and awkward as David Cage has taught us to expect from his games. But I think that’s part of why I make a point of playing every one that comes out. They’re not trainwrecks, per se, but there are definitely things I “enjoy” beyond what the developers intended. For example, many of my attempts to deftly manipulate scenes in the game ended with me accidentally killing a character (usually Connor). But even so, it was still fun to see the repercussions of my hubris as they reverberated through the story. The number of possible branches each scene can take is staggering, and actually makes my actions feel like they have weight. The Caginess is there, uncomfortable allusions and all, but it’s exactly what I signed up for.

I played Solitairica (my #1 in 2017) basically nonstop for over a year, completing every deck in the game on both difficulties, including the (sometimes fiendishly difficult) DLC. Doing so left a gaping hole in my life. NOW what was I supposed to do? Enter Meteorfall: a deckbuilding game, but simplified. There is no playfield like Magic or Hearthstone; you only choose whether to play the card you’ve drawn or rest, which regains stamina. It’s deceptively simple, but the increasingly difficult run-based structure leaves you constantly fiddling with your deck to get further and further. I haven’t sunk nearly as many hours into Meteorfall as I did Solitairica, but it scratches that card-game itch quite well.

You don’t play Tetris Effect so much as perform it. Sometimes you’re only getting a few lines here and there and the music is sparse, but then you start nailing line after line and it kicks up, giving your play session a kind of musical narrative arc. You’re not making the decisions on the music, of course, but it makes you feel like a genius. This experience is much greater than the sum of its parts, like skiing downhill and adding a jet engine. The Journey mode, in particular, is quite a ride, throwing challenges at you just before you’re ready, to see if you’ll rise to the occasion or succumb to panic. Playing Tetris Effect means gazing into a terrifying abyss of tetrominos and then swan-diving into it. It truly is, as the text on the title screen says, “a voyage of emotion and discovery.”

There are a few game genres that I just don’t gel with. “Metroidvania” is one of them. I’m not sure why, but put pinball in there and I am SOLD. It’s two tastes that you wouldn’t think would go great together but totally do, like a peanut butter and pickle sandwich (seriously, try it). Even when you’re backtracking your way through a level, you’re still playing pinball. Everything looks pretty, the pinball physics are great, the music is fantastic… Play Yoku’s Island Express, is what I’m saying.

Oh my goodness. When Abby and Dan mentioned Holedown on the Beastcast, I had no idea a simple game about ballz would consume my entire life. I not only devoured all the static levels immediately, I played the endless mode for months. I’m STILL playing it. And I don’t even know why! I guess I’m trying to beat my high score? When was the last time I tried to beat a HIGH SCORE?

Regardless, Holedown is sublime, from the physics to the sound effects to the cute little worm in the corner watching your every move. Whenever anyone asked me for game recommendations this year, Holedown was at the top of the list. 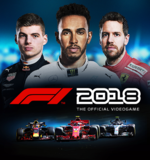 The tenth instalment in the Formula 1 franchise developed by Codemasters