Yesterday, #KAHISPOGCHAMP came to fruition. Today, Kah is back on Giant Bomb with another list of his favorite games.

Kahlief Adams is the captain of the Spawn on Me podcast. In 2020 he co-organized Spawn 4 Good's charity stream to benefit VoteRiders.org (which featured Giant Bomb's own Brad Shoemaker and Alex Navarro).

When he's not lobbying to replace problematic emotes on Twitch, you can find him on Twitter at @Kahjahkins.

It is super rare to see a pack-in game turn out to be one of the best releases for a console's debut, but Astro's Playroom is the perfect game to showcase all of the goodies of the PS5’s DualSense features, while also bringing style and whimsy. I spent way more hours in Playroom than I ever would have expected because of my need to snag every collectable and investigate every nook looking for every morsel of Sony nostalgia.

I will fully admit that I am a scaredy cat. I wear this badge proudly when it comes to souls games. As a person who hates the frustration that goes along with this genre of game, I found myself enraptured not only by the desire to finally finish a souls game, but to dig through the muck and mire of one of the best games in the series. It is by far the most beautiful game on the PS5, and it gives me a great deal of hope for what these kinds of games can be on next-gen systems

I remember when I first saw this game at E3 a couple of years ago, and I distinctly recall leaving my appointment super happy. Before I finished with my session I told the team, “This game is going to be huge,” and it looks like I was right. Fall Guys has spawned so many cultural connections through brand alignments--and, more importantly, memes of people failing to qualify--that it has to be on every end of 2020 list. Fall Guys is the perfect “drinking and gaming with friends” game in so many ways. and I’ve had infinite levels of fun playing it this year.

Spider-Man: Miles Morales is the most important game on my list this year because of what it means to multiple cultures. Insomniac nailed this bridge game between characters in the Marvel universe in a profound way. Miles got a game that made him a household name while giving people of color (especially afro-latino) folks a superhero they could root for and call their own.

The game is stunning in every way, and has a fun story that attaches you to all the characters involved, while also making Manhattan fun to traverse again. I’m eagerly awaiting any and all DLC they drop for this one to see how they build on a fantastic universe with smart heroes.

Supergiant just makes fantastic games. Everything they touch has levels of polish that other games only wish they could have. Brilliant storytelling, a gorgeous and stunning art style, mixed with pithy and snarky characters makes this game so much fun. Each piece feels bespoke and crafted in a way that feels special, and MY GOD the music is even more of a reason to jump into the game and enjoy every moment you play.

Godfall got panned a bunch this year, and I don’t really understand why. It currently is one of my favorite games of the year because it is pretty straightforward AND out of most of the games on my list has the most room for improvement. Combat is fun and intuitive. There is a challenge to be found if you dig a little beneath the surface, and it’s super fun in multiplayer. I want people to give love to Godfall so that it can flourish with some developer love in the same ways that Warframe did. I’m hoping folks give the game a chance at some point. It is worth your time.

Spelunky 2 is the best game on this list that I am absolutely horrible at. I was fairly decent at the first game, but in this sequel I find myself often scratching my head and yelling to myself to “git gud”. Scrubbiness withstanding, I just love Mossmouth games for how each piece of their puzzles fit. Spelunky continues to be the perfect blend of tight platformer mixed with procgen goodness. I never feel cheated, but always come away mad at myself for not being better.

Talk about a game that caught fire this year. Among Us is one of those moments in gaming that you don’t see coming. Every year one game comes along that a streamer makes popular and then everyone jumps on it. Among Us aka “You don’t have to lie, Craig” is a fantastic testament to the human spirit. It is the game that tells you the most about your friend circle and who you don’t want to be the executor of your will when you die. I’ve had so much fun lying, getting caught, and shanking friends in the back.

I never thought I would play a Minecraft game. I missed the era where the game was hot among the 12-year-old crowd, so having this on my list was definitely a surprise. Minecraft Dungeons is a deceptively deep and fun game that had me frequently coming back for more, grinding for loot and trying to figure out good builds to take on baddies. Each piece of DLC has built upon the last, and has given the game staying power in a way that I didn’t think it would. It is a perfect game to play with kids and adults alike, which is a hard thing to come by these days. Definitely pick this up for quick blasts of fun with friends.

The Last of Us Part II

The Last of Us Part II is my favorite game of the year. It wrapped up a memorable story by adding new protagonists and growing the main cast. Ellie became the killing machine we knew she would, and held an important mirror to the player to see how ruthless we could all be. Every heart-wrenching and visceral moment fully showcased the breadth and depth of Naughty Dog’s prowess in design and storytelling. I was sad to see the game end and sat with every choice I made post credits. It is a must play and I hope it gets a PS5 update to show off all the glory a new layer of graphical fidelity could bring. 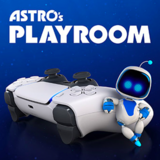 Astro's Playroom is a 3D platformer that comes pre-installed on every PlayStation 5 console. The game showcases the features of the DualSense controller while celebrating the history of PlayStation.