by Brad Nicholson on November 18, 2010
Share:TwitterFacebookReddit

A standalone LittleBigPlanet spin-off is coming to PSN in advance of LBP2's retail release in January. SCE and Media Molecule have just lifted the lid off of Sackboy's Prehistoric Moves, a 10-level platformer based in the LPB universe.

Before we even talk about what the game is, it's probably best to talk about all the ways it's been designed to keep you from playing it. Prehistoric Moves, as its name teases, is a PlayStation Move-exclusive title, requiring one Move wand and an EyeToy camera peripheral. It's also co-op exclusive. You'll need at least one friend with you in order to play, though that person will be using a DualShock controller.


Got all of that? Great. Prehistoric Moves is probably most comparable to an LBP campaign expansion. It's themed, it's small, and it brings some new mechanics to the table. In this specific case, the new mechanics appear wrapped around the Move functionality. As the leader with the wand, you'll be asked to flick switches and push levers in order to get your buds with the controllers around obstacles blocking an end point. The announcement on the PS blog post outlines some of what you'll do specifically in some of the game's dinosaur-filled levels:

Leap between Dino heads, use the Move controller to blast aside crates of bubbles, ride dinosaurs through prehistoric cities, and take to the heights of tree canopies--then team up to defeat Big Rex, all while collecting trophies along the way.

== TEASER ==
Prehistoric Moves will appear on PSN starting on December 7, but only as a free downloadable gift to PSN Plus owners. The actually PSN version of the title will show up on December 14 for $5.99. But you may want to hold out a couple of weeks, since the game will also be included on the LPB2 disc when the game hits this January 18.

In other LBP2 news, a campaign demo is hitting the PS Store this December 21 and the game's beta has been extended. Also, more invitations are going out, so keep checking that inbox. Sackpeople! 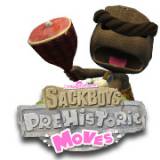