by Patrick Klepek on August 6, 2014
Share:TwitterFacebookReddit

When friends I trusted started getting obsessed with a free-to-play game about celebrity, I had to find out why.

There was a moment my time with Kim Kardashian: Hollywood evolved beyond academic interest.

It's 1:30 a.m., and definitely time for bed. But I'm painfully close to full stars during a photo shoot. It only would take a few more taps to get there. Unfortunately, I've run out of in-game energy, which is only refilled by waiting for a countdown timer to expire or--gasp--spending money. As this experiment was centered around not spending money, I watch the timer methodically tick down. It's only two minutes. Who can't wait two minutes? But that one slice of energy wasn't enough to finish the job. The game asks me to wait another four minutes, which I do. But even that's not enough to satiate this app, and real-life Patrick is real-life tired. By now, it's nearly 2:00 a.m.

You've probably heard about Kim Kardashian: Hollywood by now. The game made $1.6 million in five days. One analyst believes Kardashian is making $700,000-per-day. Another predicts the game could make $200 million annually. Wherever the numbers end up, it's big. What piqued my interest, however, was how many of my colleagues, many of whom spend their days and nights pontificating about the power and impact of games, were spending hours with Kim Kardashian: Hollywood, and loving every minute of it.

Since I was spending last week catching up on Agents of S.H.I.E.L.D. in preparation for Guardians of the Galaxy, I had ample time to poke at a touch screen on my couch.

The game opens by having players select a gender for a character who works in a tiny clothing shop that juuuust so happens to be where Kardashian has an awfully convenient fashion emergency. She appreciates your help enough to invite you to her photo shoot, which quickly turns into your photo shoot. Kardashian takes you under her wing, and so begins your hopeful ascent to join her in A-list status. You start on the E-list.

(As an interesting aside, the game makes no jokes or judgements about a guy becoming infatuated with Kardashian and trying to emulate her lifestyle, which seems like an easy pot shot. Thankfully, the game's much smarter than that. This extends to another early option to identify your character as straight or gay, which it presents discreetly and without comment.)

From there, players are assigned various jobs--photo shoots, club appearances, professional partying--and participate in various activities at each. By participate, I mean click on a bubble, and things fall out. What falls to the ground are icons to fill meters for leveling up (which let you travel more places), cash flow (to buy apartments, cars, clothes), and, most importantly, energy. Energy is required to do anything, and you're always running out. In Kim Kardashian: Hollywood, your most valuable asset is time.

In the first hour, things require so little energy and you're leveling up so often (which refills your energy) that you don't have to worry about the game's free-to-play dark magic. It's what allowed me to realize what probably hooked so many of my friends: the genuinely funny writing.

The game's wink wink, nudge nudge tone serves several functions. Chiefly, it's a seething critique of media culture, and its cyclical obsession with bringing people up and tearing people down. You can argue Kardashian and her ilk are active participants in this culture, which excuses them from being able to credibly present such a takedown, but that's another essay for someone much smarter.

What the writing does, however, is lower your guard. I don't know much about Kardashian personally--my exposure is walking through our living room when my wife is watching her reality show--but I wouldn't have expected a sign-off on such knowing barbs. It feels like a middle finger to the world that made her, even if she owes much to it. Even if that's reading into it, it's sharp as hell, and proves a terrific carrot for coming back. The writing hooked me, as the game slowly dripped new characters explicitly designed as takedowns of popular celebrity tropes. I wanted to know how far it'd go. Plus, as a reporter, I lost it during moments like this.

Soon enough, it's time to get to work. Kim Kardashian: Hollywood's general loop involves answering a phone call, which directs the player to a location. Then, you click and click and click. Your character doesn't "do " any of the actions presented, the meters just go up and down. Eventually, you run out of energy, and one is now presented with the central dilemma of a free-to-play game, which this one hardly tries to avoid: pay up to continue. Sequences end when the player collects enough stars to fill a meter (I hope you love meters, since this game really loves meters) or a pre-determined amount of time passes.

More stars means more fans, and more fans means you move up the celebrity rankings. But I wasn't willing to give Kim Kardashian: Hollywood any of my money, so the waiting game began. It's possible to earn money (but not energy) through alternative means, but it gets dirty fast. The options range from the odd but reasonable, such as playing a web game from for a few minutes, to, uh, signing up for an Allstate quote. Honestly, I tried to play some of the web games on my iPad, but none of them worked. I managed to avoid Allstate.

Money isn't the real draw in this game, though. It's energy. In the game, you're always tired. The game sends alerts when your energy is full again, so it's possible to leave your iPhone or iPad laying on a table, then pick it up when the game notifies you it's time to--oh, god--come back.

A key part of the discourse around Kim Kardashian: Hollywood has been how the game might secretly be instructive about the real-life demands of being a celebrity, charting Kardashian's own journey to the A-list. Like her, the player is always in the spotlight, asked to be the center of attention, deals with manufactured bullshit, and constantly on the move. That doesn't sound particularly glamorous, regardless of the money and fame. Maintaining an abstraction of that lifestyle was exhaustive enough.

Essays about how Kardashian leveraged a moment of personal exploitation--her sex tape--to control her celebrity narrative got me interested in playing the game. It seemed like a shallow game with meaningful subtext. There's much we can read into Kim Kardashian: Hollywood, but I'm not sure the "game" itself deserves all the acclaim for that. What one reads into the game has much to do with what we bring to the table, whether it's our views on celebrity, the success of Kardashian, or other related topics.

Even after the curiosity wore off, I kept playing the game. There were two reasons. One, I might have been slightly addicted to the simple loop of watching meters go up, which made me feel pretty weird. Two, people are dicks about Kim Kardashian. People really dislike her, and I can't quite figure out why. She's played the celebrity game pretty damn well. If everyone could do it, they would. But you can't say "Kardashian" without inspiring ire. Upon reaching the D-list, I jokingly had the game spit out a robotic tweet. People were pissed, and it seemed to go well beyond irritation at single manufactured tweet. With Kardashian, it becomes personal.

Ultimately, if judged as a game game, it really is terrible. Similar to fast food, it only feels good in the moment. The writing only carries Kim Kardashian: Hollywood so far, and it's a few hours at best. It's impossible to move forward at a decent pace without paying, and there is zero skill involved. Candy Crush Saga and other free-to-play games might have equally exploitative tactics for extracting money from players, but has some level of mental taxation. Here, it's nothing more than mindless clicking. Click, click, click. Wait, wait, wait.

But maybe that's the point: it's supposed to be boring. It's a time waster. Some games can just be. If a game is shallow and exploitative, does that matter, so long as the participants are willing and content? That question causes an existential divide between folks like myself and casuals, or whatever you want to call them. "These games are shit. Why don't you know any better?" But who cares? They're playing this, enjoying it, and Kardashian is making money. Is someone really the bad guy (or girl) in this situation? Empty calories aren't the end of the world. We all have guilty pleasures. At least Kim Kardashian: Hollywood is aware of the world it's playing in, even when it's asking for you to pay up. "You're here, I'm here. Let's make the best of it?" 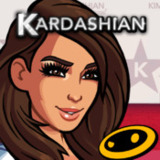