So I Scrapped a Tomodachi Life Feature, But Wanted to Share This Anyway

by Patrick Klepek on May 13, 2014
Share:TwitterFacebookReddit

In light of The Sims 4 and Tomodachi Life, it seemed like a good time to ask ratings organizations to explain their policies on LGBT content in games. It's all good news.

When Nintendo said it wouldn't alter Tomodachi Life to support homosexual relationships for its release outside of Japan, one question I heard was whether the game's rating was a consideration. The sales potential of a game rated "E" versus "T" could be massive for a mainstream-focused game like Tomodachi Life.

I'd been working on a larger Tomodachi Life piece last week that I axed after Nintendo released a statement last Friday. The angle no longer made any sense. But yesterday, news broke via Ars Technica that The Sims 4 had received an 18+ rating in Russia because of law 436-FZ, otherwise known as "On Protection of Children from Information Harmful to Their Health and Development."

It's not explicitly clear The Sims 4 received its rating because the game allows homosexual relationships, but the game was released with lower ratings in other countries. Russia has been criticized for its treatment of LGBT individuals, and 436-FZ was amended in 2013 to have "propaganda of non-traditional sexual relationships" to be considered as offending content.

EA has since told Polygon it will not be altering the game's content in Russia.

But while researching my Tomodachi Piece, I asked several worldwide games rating organizations if the inclusion of homosexuality would impact a game's rating. It seemed like a good moment to have this on-the-record from everyone. This included the Entertainment Software Ratings Board (United States), Pan European Game Information (Europe), and Computer Entertainment Rating Organization (Japan).

CERO did not return my request, but I found no evidence it takes homosexuality into consideration.

Here's what the ESRB said:

"ESRB’s ratings criteria do not distinguish between heterosexual and same-sex content when it comes to addressing sexuality in games. Assuming no other changes were made to the game, the ESRB rating assignment would not be impacted."

A few years back, a report surfaced that Natsume had removed same sex relationships from Harvest Moon over fears the rating would increase.

And here's what PEGI told me:

"No, this type of in-game content wouldn’t have altered the rating. PEGI doesn't take peoples sexual preferences into consideration when examining a game. We cannot judge who or why a character/human chooses to love. We look at the content of a game, not the context. There are a few questions in our questionnaire that deal with sex or nudity (Q4, 14, 15, 25, and 35). But as you can see, there’s no distinction between homo- or heterosexual contact/relationships.

The questionnaire is designed to be a top-down questionnaire. This means that as soon as there is any content in the game that could be inappropriate to a specific age group, the game automatically receives the rating for that age category.

For example: If a game contains violence that is rated as 16 but it also contains fear (7), it will only get the 16 violence content descriptor and not the fear descriptor."

If you'd like to read through the PEGI questionnaire referenced in the statement, it's featured below.

A few other notes: 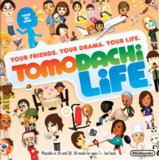 When a variety of Miis live in an apartment complex on a secluded island, relationships and bizarre situations happen in this comedic life situation game for the Nintendo 3DS.