The Community Spotlight is still not permitted back on the PlayStation Store.

Hello and welcome to the latest edition of the Giant Bomb Community Spotlight! I, @zombiepie, am once again honored to be your host as we look back and enjoy the best user-created works from the previous week. Whelp, we certainly survived E3 2021. The event has come and gone and despite all of the digital-only weirdness, it mostly succeeded in what it set out to do. It got people talking about video games and provided a handful of major companies a platform to showcase their best stuff. It was certainly awkward at time, but I would take that awkwardness over not having any form of E3. The other big highlight of the week was Giant Bomb's collaboration with GameSpot to raise money for the AbleGamers Charity. Many thanks for those who were able to donate, and many more thanks to RedVentures chipping in to help the event get past its fundraising goal, but more on that in a little bit. With all of that in mind, let's jump into the site-related housekeeping!

It's the first day of summer, and you know what that means.

It's officially time for THE REALEST SUMMER JAMS.

I want to thank all of the YouTube accounts that are making sure the comments on @giantbomb's "Quick Look" for Phantasy Star Online 2: New Genesis remain ON POINT!

@austin_walker's exasperated "that's their weed carrier!" line is probably my favorite giant bomb quote of all time. e3 2016 was a hell of a show. pic.twitter.com/gGXv4IFq9l

really enjoying this 7 year old thread i hope giantbomb user makari is happy that it did definitely catch on pic.twitter.com/tcPmzj8hcw

Well... it was bound to happen. The Anakin x Padme meme was bound to hit Giant Bomb, but if the Giant Bomb themed versions of this meme are as good as this, then I think I am okay with that.

A Cammy Figurine With A Mortal Kombat Keychain Around Her Neck (By: @Tom_omb)

Twitter user Tom_omb noticed during Garage Talk 7 that Jeff mentioned it would be "cool" if someone where to put a Mortal Kombat keychain around the neck of a Cammy figurine. So... they did that and also drew it in the form of a funny sketch.

Are there any Giant Bomb users out there that want to share their Game Builder Garage community game IDs? Using this link you can share whatever creations you have made in the game with other Giant Bomb users!

What's The Deal With Dungeons & Dragons: Dark Alliance? (By: @gla55jaw)

gla55jAw wanted to like Dungeons & Dragons: Dark Alliance and takes to the site to breakdown what's wrong with the game and why their impressions of it, similar to Jeff's, went from "It's fine!" to "This is baaaaaad!" in a matter of hours.

Sea Of Thieves: A Pirate's Life DLC Impressions (By: @mrmckrinkledink)

When Jack Sparrow was first announced for Sea of Thieves, a lot of people were dismissive. However, MrMcKrinkledink writes about why they think Sea of Thieves: A Pirate's Life spices things up in the right ways, especially for single-player users.

Little Inferno Is A Decent, If Shallow, Puzzle Game With More Resonance Than Ever After The Last Year And A Half. +

Assassin's Creed Chronicles Is Not A Great Subseries, But Its Ambition Made It Much More Interesting Than I Expected (By: @bigsocrates)

First, they finally got around to playing Little Inferno and shares why they think the impact of the game and its story don't hit as strongly as it did when it first came out. Second, bigsocrates talks about The Wild at Heart and how it takes the mechanics of Pikmin and undermines them with what they consider "tedious mechanics." Finally, they revived their retrospective on the Assassin's Creed franchise with a detailed post about Assassin's Creed Chronicles and shares why the spin-off's ambition is undeniable even if it is an uneven overall experience.

Persona 5 Strikers: More Than A Musou (By: @jeremyf)

jeremyf wrapped up their time with Persona 5 Strikers and uses their latest blog on Giant Bomb to implore people to not dismiss it as "just a Musou game." Give it a read even if you dismissed the game as such.

How well has Miitopia aged? Was it ever a good game or was it defined by platform-specific gimmicks? That's the topic of imunbeatable80's latest blog and you can read if they think the game has legs!

qreedence used last week to strike off Uncharted 4: A Thief's End from their gaming backlog. They also ended up playing Final Fantasy VII Remake Intergrade. Use the link to find out which of the two they enjoyed more!

Last week moderator Gamer_152 review the major E3 2021 press conferences individually. This week they review many of the smaller conferences and their overall impressions of the event's all-digital format.

Moderator Mento's "Indie Game of the Week" feature continues with a look at Blasphemous, from the makers of The Last Door! If you want to know how this dark fantasy game shapes up, give their blog a read!

A Feel Good Story For The Year Brought To You By... NIS America? (By: @efesell)

There are a lot of users excited about NIS America, Inc. and a wave of Legend of Heroes localizations coming to the Epic Games Store in '22/23! Are you excited about the news? Join our conversation and share any other games you are hoping get a similar treatment.

Windows 11 - You Might Want To Check If Your PC Will Run It (By: @wacomole)

What do you make of Microsoft's Windows 11 reveal event? Have you checked to see if you system can run the OS? Where do you stand regarding the requirement to have a Microsoft account? Share your thoughts and impressions using the link above!

The Fast & Furious franchise is a cherish cultural touchstone among the Giant Bomb community. It's a movie franchise about family and there's nothing you can do to deny that. Nonetheless, the franchise celebrated its 20th anniversary and using the link above you can share your favorite films from the series as well as share your thoughts about Fast 9 with other community members.

Best Licensed Music You Discovered From Video Games (By: @redcream)

Here's a fun discussion thread on the forums for the more musically minded users: what's the best song or musical artist you discover through video games? Is there one video game that added a ton of music to your playlist or introduced you to a new genre?

Quake Shareware's 25th Anniversary is today! What are your personal favorite Quake map or level mods? Did you ever get into the Quake homebrew or map-making community?

Dungeons & Dragons: Dark Alliance released and most Giant Bomb users are not a fan of what they have played of it! Even if you disagree, feel free to join the community discussion about the co-op RPG!

State Of Play Event Rumored For July (By: @gtxforza)

There's a growing amount of evidence suggesting that Sony might be readying itself for a State of Play event during July. Do you think a Summer showcase makes sense for them? If true, what sorts of games do you expect or want to see?

Heading Out is a new driving that is an entirely novel IP from an indie developer! Its black and white aesthetic is a bit of a polarizing issue with the Giant Bomb community but you can join the discussion with your thoughts using the link above!

There's another roadmap and UI update for Star Citizen. I am also told there are new quality of life additions being added to the game. I remain unconvinced this game is not just a giant money pit.

You may recall from last week moderator Mento watched fifty trailers posted on Giant Bomb related to E3 2021 and reviewed them. Well... there were a lot of trailers posted to the site this year and they made a "part two." 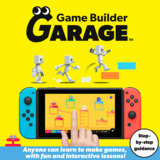 Game Builder Garage allows players to create and share their own games on Nintendo Switch.