The Madness of David O'Reilly's Mountain

by Patrick Klepek on July 15, 2014
Share:TwitterFacebookReddit

It's just a mountain. Or is it? Welcome to an existential nightmare, one that doesn't gain much clarity from Mountain's own creator.

Right now, my mountain features some trees, a cone, bananas, an egg, clouds, a plate, what appears to be a penny, dead trees, an enormous pickaxe, part of a light bulb, and falling snow.

This mountain is actually from Mountain, a new video game from artist David O'Reilly, whose work you'd be most recently familiar with from Spike Jonze's movie Her. O'Reilly was the animation supervisor for the film's video game sequences. But Mountain is O'Reilly's first game, though I suspect much of the commentary below will focus on whether or not we can call it that.

I consider it a game, but Mountain challenges you, and not liking it is fine. It's personal, an experience that provokes strong reactions.

Here's what you do in Mountain: look at a mountain, then look at it some more. It's a little more complicated than that, but not by much. You can rotate around the mountain, zoom in and out, and interact with a simple piano at the bottom of the screen. Every once and a while, an object, such as a banana, will come flying towards the mountain. More objects show up, the world cycles through day and night, and the seasons change every once in a while. That's really it.

There's is no goal in Mountain, no win state, no explicit progression. Heck, even the controls are listed as "nothing," which is patently false. But there's truth in the bluntness of Mountain's glib answer because the controls don't matter. You're allowed to rotate this mass of polygons resembling a mountain, but you have zero impact on its digital mass. The mountain exists, and you're there to observe. It's as frustrating as it is inspiring, and I'm not surprised it has led to all sorts of head scratching about what to make of it.

We expect games, even artful ones like Journey, to explain themselves, and convey a reason for existing. Mountain doesn't. It's possible there's more to Mountain, but maybe not. Maybe it's just an art piece--a mountain is a mountain is a mountain--or maybe something happens if I tap the right musical combination. I. Don't. Know. Mountain has just enough interactivity to suggest the player can be part of the Mountain experience beyond the singular act of watching stuff occasionally happen to a mountain.

To that end, it's easy to think of Mountain as a commentary on gaming, a reaction to the handhold-y nature of modern games, experiences deeply afraid of players not having a good time or moving forward. If the defining part of a video game is interactivity, Mountain is certainly a game, as Mountain is interactive. But does it have meaning? And what happens when its creator won't even fill in the blanks? Are we only screaming into the void? Fuck. It's possible the obliqueness of Mountain is what prompts me to project these feelings, as I try to graft form, function, and meaning onto an object with so very little.

Imagine observing clouds float by on a sunny day. Something very big is happening right in front of you--the transition of the day, rotation of the Earth, the movement of time--but you have no control. You can observe, learn, and respect what's unfolding, but that's it. What little impact one person can have seems terrifying, but in the same measure, a source of relief. Mountain is equal parts stressful and pleasing.

For the last few days, my iPad has been mounted on my desk, its ability to dim its screen after a few minutes turned off, and my mountain turns and turns and turns and turns. It's a little distracting at first, but eventually, much like the instrumental music pumping through my speakers, it becomes part of my desk. Sometimes it changes, sometimes it doesn't. It doesn't really care about me, but out of curiosity, I care about it.

As I write this, the words "I'm a Total Babe" just scrolled across the screen. Why? Beats me.

To try and learn more--try being the important word here--I emailed some questions about Mountain to the man behind it, David O'Reilly. If you've been following his Twitter account, you know he's been taking some joy in the response to the game, especially when it comes to several angry iTunes reviews.

There's clearly a performative aspect to Mountain and the way O'Reilly talks about it, so keep that in mind when reading his answers. He actually apologized to me for not wanting to say too much.

In any case, here's our conversation.

Giant Bomb: When you think of a mountain, what comes to mind?

GB: OK, but seriously, have you ever climbed a mountain?

GB: If Activision came up to you and said "hey, kid, explain Mountain to me," what would you say?

GB: So many video games ask the player what they want to do. Mountain just exists. Stuff happens. Do you consider Mountain to be commentary?

O'Reilly: I don’t say anything about what it is or isn’t. Some people see it as a commentary, others don’t.

GB: The items that end up on your mountain are...random. Shovels. Bananas. Eggs. Were you just flipping through Flickr albums?

GB: People seem to love or hate the game. I adore the mindlessness. My iPad is set next to my computer, and I check in on my "creation" every so often. What do you make of the response?

O'Reilly: It is larger than I expected. I am neither happy nor sad about any of it. I just care about making things.

GB: You've been tweeting about the response to the game, especially the iTunes reviews upset there's not more to do. To them, Mountain seems like trolling. Do you see it that way?

O'Reilly: There’s nothing in any official description of the game that up-sells what it does. If people are upset because they’re expecting Flappy Blade Of Duty it’s not something I worry about.

GB: When I first turned on Mountain, I was waiting for the moment of revelation, when it would click. The equivalent of a head shot. "Ah, yes." But it never comes. That point seems intentional, no?

O'Reilly: I can’t talk about my intentions of the game. Some people will find meaning and others won't. There is no right or wrong interpretation.

GB: Given your contribution to Her and Mountain, you're clearly a fan of games. What drew you to them in the first place? Do you feel differently about them now, in 2014?

O'Reilly: I’m not particularly a fan of games at large, the ones I have really enjoyed are few and far between. I do find the medium fascinating, particularly what’s happening with indie games, I’m just more interested in making than playing. 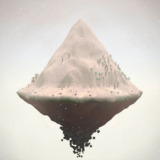 A 'mountain simulator' from David O'Reilly.

In our third episode of Guilty Treasures Danny dusts off his PlayStation to try and understand why Jan feels such love for an obscure PS1 platformer.