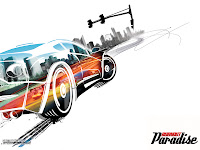 Burnout Paradise is the latest in the series from developer Criterion Games which specializes in celebrating grotesquely over the top automobile collisions. I'm not exaggerating when I say that the visceral crashes in Burnout Paradise border on fetishism, but in the context of the game it's well executed and actually fun. There's something almost erotic about driving down a crowded street at a blindingly fast speed, zigging when you should have zagged, and clipping the rear bumper of a car crossing an intersection, causing you to launch 360 degrees in the air, slam into an overpass, and land roof-down in a railroad yard below. Unfortunately in order to keep the ESRB wanks happy the streets are clear of pedestrians and even drivers are absent. This isn't that much of an issue however because there's plenty of other stuff to avoid fusing your car with, and in lieu of bystanders, the game runs at a gorgeous sixty frames per second. The soundtrack is also relatively diverse, but I turned the music off after the first day and haven't missed it.

Burnout Paradise is an open-world game, with no loading times apart from the initial startup and whenever you visit one of the many junkyards to swap out your vehicles. The world itself is expansive, ranging from quiet country roads and small towns to a large sky-scraper laden city. The game follows a mission-based structure where in order to increase your rank you drive up to an intersection and hold down a few buttons which starts a challenge. There are standard racing challenges, takedown challenges where you have to battle it out with a host of other psychotic drivers controlled by the AI and have to send a specific number of them to their twisted-metal grave in order to advance, marked man challenges where you have to drive from point A to point B without getting taken down by the aforementioned AI too many times, and stunt runs where you have to earn a set amount of points in a limited amount of time by executing absurdly treacherous stunts that would make the Blue Angels proud.

The driving definitely feels more on the "arcady" side, but it suits the style of the game. This isn't a racing simulator, there's no shifting to worry about, and when you inevitably total your car all you have to do is wait a few seconds and you respawn next to the spot where you transformed your previous vehicle into a work of modern art. It's quite easy to pull off 180 degree turns, and some of the higher end cars feel closer to advanced jet fighters than brightly colored European toys that people with too much money purchase during a mid-life crisis. Car customization is there, but you can only change your paint job. You can't crack the hood open and add specialized parts or mess with gear timings, but it's not meant to be that type of game.

Each time you advance your license you get access to new vehicles, and every now and then you'll unlock rival cars that will suddenly appear in the city. When you stumble across one of these cars you have to do everything in your power to take them off the road, and if you do, you're rewarded with their car in your garage. The cars are broken down into three classes: Speed, stunt, and aggression. Each class handles differently and earns "boost" by either going fast, performing crazy stunts, or driving like an asshole respectively. It's when you use boost that the game takes you from a mere 160 mph and sends you careening down the street at mach 10. The mechanics work well enough, but I can't help feel that the single player portion is somehow lacking. The challenges become repetitive after awhile, and amount to an exercise in frustration, especially near the end of the game where you have to complete over 100 challenges to advance to the last rank. I've had the game since the week of release and I still can't be bothered to get the last rank. Another unfortunate aspect is the Burnout Revenge style fixed-scenario crash courses are gone and replaced with a less satisfying crash mode that can be activated at any point in the game. While this sounds good in theory, it misses the point of the original crash courses which were a brilliant exercise in the butterfly effect, with one small initial crash resulting in a spectacular blaze of vehicular destruction if done just right. Each course was its own little puzzle just waiting to be explored.

The multiplayer in Burnout Paradise shines. With a few button presses you're suddenly hurled into a match with other players where you can do just about anything. You can participate in various challenges, either competitive or cooperative, create your own races with your own checkpoints, or just dick around, and believe me, dicking around in Paradise is an absolute joy. Half the times when my friends and I played we eschewed the structured activities in favor of ramming each other senseless, or having one player pick a C class car while everyone else picked an A class and then proceeded to try and hunt down and murder him. Though the multiplayer gets a gold star, there's an annoying intersection between single and multiplayer: You have to play the single player in order to unlock the better cars to take online. This is annoying, but somewhat forgivable as it doesn't take that long to unlock the more popular vehicles. Criterion has also been working on expanding this aspect of the game with future patches that will add motorcycles and, in theory, aircraft, though I have no idea how they plan to pull the latter off.

Other reviews for Burnout Paradise (Xbox 360)

Paradise City is filled with things to do.Burnout Paradise takes a huge leap in innovation from the previous Burnout titles. As a gamer who isn't incredibly interested in racing games (besides the occasional Mario Kart), I was naturally skeptical about Burnout Paradise. But, after seeing it for $20 as a Platinum Hits title at GameStop, I decided to buy it. I do not regret that decision.Burnout Paradise is a unique racing game. After selecting a car and fixing it up, you are free to go wherever y...

The Burnout series is the only set of racing games that I've ever really been able to stomach, and that is for a few reasons.  One being the fact that the game is as much (if not more) about wrecking stuff and causing destruction as it is about racing, and the other main reason is that it doesn't do that crap about making it feel more like the "real world" by making you manage money and repair and buy your own cars.  This game not only doesn't punish you for bustin' up your own set of wheels...

Add new review * Read the most helpful review by starfoxa