Hey guys, I've been wanting to give older games such as Balder's Gate a go but I am relatively new to the genre. Basically I was wondering if anybody good recommend a good game for somebody new to the genre, who also has no experience with D&D rules. These games just look really complex and wouldn't know where to start. Thanks.

2. Play with one or two people who have played it before/want to try it for the first time as well, via the six player co-op.

Wizardry 4. No wait, Pools of Darkness.

Or Chaos Strikes Back. Or Deathlord.

All super easy. Just pick one and jump right in.

The original Fallout isn't a D&D game but it's a great old RPG that isn't very hard. Just pick small guns as one of your skills and you're good to go.

Don't try ToEE on your first go, I'd say something like Baldur's Gate 2 or Fallout.

The original Baldur's Gate isn't bad. BGII since you start off at a higher level has less hand holding. The first BG is fine if you play a warrior, cleric, or warrior/cleric. D&D cleric are buffers and healers but they also are decent fighters. Older D&D games are easier in diifculty but are harder to play without a bunch of jumping through hoops to get them to work and then they are first person until combat. Fallout is also fine, just want to keep your strength high enough to wear power armor (like 5 or above). I had to restart when i couldn't put it on (and then I realized like a few days later I maybe could have just buffed until I got the armor on..). And small arms is the way to go there.

And yeah ToEE and Wizardy is trolling you.

They are all hard as hell if you have never played one before, and they will all beat your ass like fresh meat that has to share a cell with Adebisi. So pick one that looks good to you and have at it.

Are you looking specifically for D&D?

Baldur's Gate series is an obvious choice.   I'd also go with the Neverwinter Nights games, a bit more modern and probably easier to play.

the amazing thing about the Infinity Engine games, is that all the sequels render their predecessors to be complete shit

So, go with BG2.
and as Dave said, play IWD2 for the combat.

I would start with Neverwinter Nights, it doesn't really feel like the older games but I think it's a good entry point to D&D games.

Why are you calling it CRPG (I know what it means)?

You might want to start by trying a non-D&D-based game before getting into the Infinity Engine games, since pretty much all of those D&D-based games operate with the assumption that you understand the rules of D&D. Learning the rules of D&D is very doable, but doing so makes for a much higher learning curve than you might be used to (i.e. be prepared to sit and read a manual for a while, and then consult back to it a lot as you play).

I'd recommend something easy to understand and start having fun with immediately like Divine Divinity. It's got Diablo-style combat with a large semi-open world full of hundreds of quests, most of which have multiple solutions, giving you more creative role-playing opportunities. Also, the game has a sense of humor, which can go a long way in making an introduction smoother.

Fallout is relatively newbie-friendly, though the graphics and interface have aged worse than its contemporaries'.

If you're determined to dive right into a D&D-based game, you could try Planescape Torment, since it's got a somewhat simplified version of D&D and de-emphasizes combat a lot in general. Also, just in case you end up discovering that you don't actually like old D&D games afterall, by starting with Torment, at least you'll have gotten a taste of some of the best writing the genre has to offer. 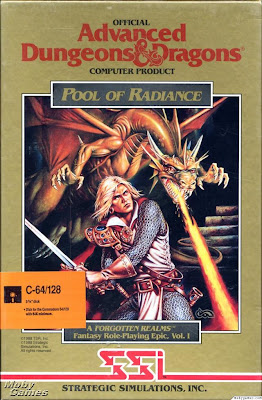 Modern CRPGs are stripped down for ease of use. If you find some of the older stuff a bit overwhelming, maybe try yourself some Oblivion or Dragon Age

That brings back some memories.

OP: If you're not against a game that doesn't use the D&D system, Dragon Age: Origins might be the best start for you. It's modern enough that you aren't going to gag at anything, and it duplicates the feel of the older CRPGs decently well.  If you make it through that, try the Infinity Engine games mentioned above.
10 years ago

The original Baldur's Gate isn't bad. BGII since you start off at a higher level has less hand holding. The first BG is fine if you play a warrior, cleric, or warrior/cleric. D&D cleric are buffers and healers but they also are decent fighters. Older D&D games are easier in diifculty but are harder to play without a bunch of jumping through hoops to get them to work and then they are first person until combat. Fallout is also fine, just want to keep your strength high enough to wear power armor (like 5 or above). I had to restart when i couldn't put it on (and then I realized like a few days later I maybe could have just buffed until I got the armor on..). And small arms is the way to go there.

And yeah ToEE and Wizardy is trolling you.

I actually think BG2 is an easier start than BG1. Since D&D has such shitty balance, low-level games tend to be more difficult (but probably more fun) than higher-level stuff like BG2. Plus the wilderness areas in BG1, while also pretty cool, can be overwhelming for a beginner I think.

I WOULD not recomend Icewind dale 2, i tried playing that, and its hard. i dont know about the orignal icewind dale but i think i remember hearing that was hard too. but i was able to play boulders gate 2 on easy in 1999, and i was 12 then, granted i only got past the starter dungeon, but it really opens up after that.

IWD and IWD2 are meant to be hard and to be challenges to those who fully know the D&D ruleset. You have to min-max an entire party to have any real shot so its not an easy entry point.

BG2 is a better game than BG1 but low level D&D for a fighter or cleric is bash until dead or bash until dead and heal. If you do decide to go with an IE game (well not really Planescape..) make sure you have ranged weapons. Bows attack twice per round whihc is a huge advanteg ealry game where melee attacks are once per round. So you want all your fighters and thieves to have bows as soon as you can. Just to make elves even more powerful they get bow proficiency for free as a racial bonus. The other thing is that range weapons use dex instead of strength and dex help you avoid getting hit and its the main stat for thieves and like the #2 or #3 stat for a mage (and yes elves get a bonus to dex too). So you'll get bonuses to hit and to avoid damage. And that's before we get to spell interruption. All spells have casting times and if a caster gets hit during that time the spell is gone and lost. So range weapons can make short wrk of enemy mages.

@TheRowGow: I don't really remember any of these games being particularly crazy hard (less forgiving than current games maybe) when I was in High School. Don't let people scare you off of them, just pick one you want to try jump in and go. If you end up having problems figuring stuff out there are places like GameFAQs to help you out.

Let us know what you end up deciding.

I started with Planescape: Torment and I was pretty young then.

It's not too hard to understand, and the gameplay itself is pretty easy. It still hold-up pretty well, and it's one of the best game ever made. It is better than Baldur's in my opinion, and easier to get into if you like the setting.

Your the only one then, I have at least 10 Croatian RPG's in my collection.

@TheRowGow: The original Baldur's Gate would certainly be an interesting choice, but as the first game of the genre you'll ever play? Ehhhh... it's a little rough without mods, and that game does not hold your hand at all past the initial tutorial sequence. Basically, the worst part of that game is getting from Level 1 to Level 2, as before then you'll die wandering around the wilderness looking for quests or things to kill. A lot. I guess the closest modern analog is Dragon Age Origins, which is a very similar type of game without the D&D ruleset.

@ArbitraryWater: I have played dragon age origins and loved the game which is the main reason for wanting to give these style of games a go. These just seem a lot less forgiving so needing one that will ease me into them.

@ArbitraryWater: I have played dragon age origins and loved the game which is the main reason for wanting to give these style of games a go. These just seem a lot less forgiving so needing one that will ease me into them.

If you've played DA:O, then yeah, go for it. Baldur's Gate starts off pretty difficult, but as long as you do enough sidequests your party should be a high enough level to progress.

Just play Baldurs Gate 1, but play at easy, and follow the main quest until you're done with Nashkell Mines (not really spoilers), as you'll have leveled up a few times. To make it easier for yourself, you can play a warrior and use good-aligned people in your party.

Starting with IWD2 and NWN series is not a good choice, as it's a newer version of the rule-set. I find it's better to go from the old version to the new, as the new is more simplified. Also, IWD2 is really hard! So definately start out with BG1, then go straight to BG2, which is the best of them all.

Thanks for all the comments. I'm going to go with Baldur's Gate and see how it goes.

If you're new to the genre, I would start with something newer to be honest. Maybe try Neverwinter Nights 2 or Dragon Age: Origins - both good games in their own right, but also easier to get into and more forgiving than some of the older options I think.

I think there's a decent chance that jumping straight into Baldur's Gate 1 today will put you off the genre for good. That game can be an exercise in frustration, especially early on and especially by today's standards.

I don't have much experience with the older games but this seems pretty similar.