A tiny gray construction worker, with no tool belt, wobbly arms, and abs that crush watermelons is your player character. The worker moves like play-doh, bending to the whim of the world around him, his pliable body taking the place of any tools he may need on his adventure. Every single object in the world of fall flat that isn't bolted to the floor is there for the little grey worker to play with.

Fall Flat encourages the use of simple tools, wedges, wheels, and levers will present themselves in some very obvious ways, but as the game progresses, the tools become part of your environment. The levers are no longer sticks coming out of the ground jumping at the chance to be played with to control the various machinery in the various levels, but instead, a piece of wood that you'll shove in some bars to pry them open. Or perhaps a pair of sticks that can be used as a make shift see-saw to lift something off the ground. I won't get to much into specifics but Fall Flat is littered with these small physics interactions.

Every level is presented in a diorama type fashion, similar to the early stages of Super Mario 64, giant floating islands that can be explored openly, all the objects provided to you can be used however you see fit, even if it might seem obvious to hold one end of a teetering rock down with a heavy object so you can scale the other side, you might want to use that very box as well as a few other objects to build a small pile to reach the top of the wall without that darn rock. The freedom of Fall Flat is the reason this game excels over most other 3D physics based platformers.

The objects in the world allow you to do anything you want, it seems obvious that in a physics based game you can do whatever you please with the objects as long as it obeys the simulated physics of the world, but in Fall Flat there are no invisible walls stopping you from dragging an object from the beginning of the level all the way to the end to help you in a later puzzle. Its often that the intended solutions are much more entertaining on a surface level than any sort of work around you can come up with, but the feeling of getting away with something you weren't supposed to in Fall Flat is just as satisfying if not more so. Which add another layer onto the cake, the unintended solutions aren't frustrating to execute, Fall Flat would fall apart if that were the case.

It is so impossibly difficult to make a game where the systems in place allow for such a sweeping variety of interaction and execution, even though Fall Flat isn't the longest game this year. It is well worth it just to watch that little grey construction worker fall with style.

Add new review * Read the most helpful review by mogarth 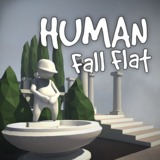