Metroid Fusion is short, but quite an impressive game.

Metroid Fusion is the first Metroid game to be released on the Gameboy Advance, and it can only be summed up with one word: awesome.

Metroid Fusion, unlike other Metroid games, is hugely story based. The game starts off with Samus on planet SR-388, and she comes across a creature--a parasite--called the X-Virus. This parasite really hurt Samus, causing her to become unconscious. After recovering miraculously due to a cure, she goes to a space station to see the commotion going on. The story gets much more in-depth from there.

The graphics, even after a few years, look stunning on the GBA. The game does everything right in terms of visuals. It's always lovely to look at, and the frame rate is smooth. There are no apparent slowdowns, and the few there are aren't harmful or big enough to even matter.

The soundtrack is very well done. It has a lot of familiar Metroid tunes, and a lot of new, suspenseful tunes. The music really built a lot of the suspense. The sound effects are also well done. Omega Metroid and Ridley are a little bit annoying since their screeches are so loud, but turning down the sound solves this problem.

Metroid Fusion has amazing gameplay. You start off with a very weak Samus Aran. She is vulnerable to extreme temperatures, can't shoot missiles, can't use the charge beam. Hell, she can't even morph in to a ball! All you can do is shoot and jump. As you progress through the game, she gains familiar powers like the charge beam, morph ball, missiles, power bomb, and the screw attack. There are also some new upgrades that are extremely awesome.

The biggest issue with Metroid Fusion is that it's incredibly short. It's not terribly linear, but if everything is followed and you don't get lost, the average person can beat the game in about four hours. If you include number of deaths and all that other stuff, the game can be beaten in about six to seven hours. That's very short. My last run of the game was clocked at about two and a half hours!

The replay value of the game is average. Some players will want to play through again, either for a speed run, a run to find every expansion in the game, or to not grab any of the expansions (although there are one or two that can't be avoided), which adds a little flavour to the game.

The boss fights are amazing. Every one is crafted differently. All are a lot of fun, and they're really the main reason to return to the game. They're not too hard, but don't walk in and act like the bosses are easy as pie. They're not.

Yoshio Sakamoto returns to his classic game series after a long hiatus.  Metroid Fusion is the first Metroid on the GameBoy Advance, and it’s a stunner.  The manga-style intro makes it clear that Samus has been infected by a mysterious virus code-named “X”.  After ramming her famous yellow spaceship into an asteroid belt, Samus is rescued and her infected suit is surgically removed at a special research station.  Ironically, the thing that saves Samus is a vaccine derived from the recov...

While escorting a team of scientists Samus is infected by an organism that causes her suit to become corrupted.  The organism creates a copy of Samus and it's up to her with her newly acquired fusion suit as well as her ship's computer to eradicate this new threat.  What we're left with is a satisfying Metroid experience.  The game plays like a classic Metroid game but with some key differences.  In terms of game play, Samus' new fusion suit allows her to absorb all the enemies as health or ... 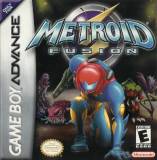