Metroid: Zero Mission is a nice package deal for anybody interested in GBA collecting. It includes both the original Metroid (presumably identical to the prior release in the Classics series) and the modernized retelling of same. Controls and graphics have been updated to match the likes of Super Metroid and Metroid Fusion, but unlike the latter game, the developers included a number of "sequence breaks" which had prior been a staple of the franchise's most devoted fans.

The plot is fairly spartan, but compared to Fusion that may be a strength; it should also be noted that they were working with whatever material could fit in the original NES instruction pamphlet for details. Control over Samus is tight and the platforming is fluid, but I found the missile controls to be occasionally uncomfortable; this goes double for play on the GameBoy Micro.

I am a rank novice at Metroid games, having only finished Metroid Prime on the Wii thus far, so my complete play time of over five hours with a 50% completion rate is laughable compared to more adept runs. That seems to line up well with the primary criticism leveled at this game over the years, namely that it is a bit short. Even I couldn't help but feel the need for more. I was also put off by some of the still art, which occasionally looked like deviantART had found its way onto my SP. That said, I enjoyed my time with the game and would certainly rank it among the best titles available on the platform. The cartridge should go for around $12 these days, making it a fairly easy purchase for those looking to start a GameBoy Advance collection.

It should also be noted that Zero Mission was the last title to come out of Nintendo R&D1, the division that was home to Gunpei Yokoi until his retirement in 1996. R&D1 was therefore responsible for producing the direction pad, the initial GameBoy, the character Wario, as well as Donkey Kong, Excitebike, Dr. Mario, and the first five 2D Metroid titles. Ignore the fact that they also made Urban Champion, and that's a hell of a legacy.

The Vibrant Rebirth of a Classic Game 0

Until I borrowed a copy of Metroid: Zero Mission, the only Metroid game I'd ever played in any great detail was Metroid Prime on the Gamecube.  Even before Prime I knew Metroid well by reputation, though: its use of special items to gain access to new areas previously inaccessible wasn't the first such design, but its platformer accessibility helped make the name Metroid itself synonymous with that idea.  Watching someone do a run-through of Super Metroid I had the urge to see where the franchis...

How Remakes Ought To Be Done 0

Yoshio Sakamoto, after a successful return to the Metroid series with Metroid Fusion, brought even more love to the GameBoy Advance with Metroid Zero Mission, a remake of the one that started it all.  Game design philosophy, let alone the technology, had changed dramatically during the 20 year span between the original and the remake, but the fundamental ideas are still as green as ever.  The combination of traditional and progressive design results in a 2D action game that retains ...

Add new review * Read the most helpful review by ahoodedfigure 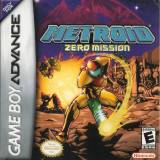