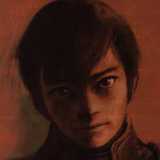 With the recent release of the Dark Souls DLC on consoles I thought it might be interesting to translate the interview from Dark Souls Design Works. It's pretty lengthy so I'll be splitting it up into four or five parts and hopefully releasing one every couple of weeks.

This initial section concerning the basic design principles is, in all honesty, not the most interesting part of the interview, but I want to provide a complete translation so...

The interview is conducted by Famitsu's Kadoman Otsuka and features the director Hidetaka Miyazaki as well as a number of artists who worked on the game.

Otsuka: Firstly I would like to ask Mr Miyazaki a little about the general design process.

Miyazaki: Well, we pursued two main avenues when designing Dark Souls. In the initial concept stages I gave each of the artists a few simple "Image words" to use as a starting point, and then they were free to develop these in whatever way they wished. We then took the images we liked, adjusted them where needed, and used them to begin shaping the world. The Gaping Dragon, Egg Carrier and Gravelord Nito for example, all emerged during this concept stage and made it almost unchanged into the final game.

Of course, in cases where I had a clearer idea of what I wanted, the design process was slightly different. For example, this is going to be used in this place, to perform this function or, the area is designed in this way so it must adhere to these conditions. In cases like this I often had a clear image of how I wanted these things to look, for example the mimic and the gargoyles. But regardless of which design process was used, rather than appoint a person to take charge of each concept, I took the designs, talked them over with each of the artists and developed them in that way.

Otsuka: With all this freedom in the design process, and the concept artists differing styles, was there a need to unify all the designs?

Miyazaki: I suppose there was, but as I said before I took charge over all the designs and was ultimately responsible for their direction, and since they all went through me I suppose there was some degree of unification. But having said that, I tried to bring out all the artists individual styles because, rather than taking pains to make sure everything was uniform, I think working closely with each designer on developing their ideas, whilst still embracing their personal style, creates a much richer, organic feeling world in the end. As I mentioned earlier, each artist began with just a few simple "Image words" and developed their designs from that, well the words which inspired each artist's designs and they way they chose to use them was very different. Some found that relatively philosophical words gave them ideas while some artists used them to develop character's back stories. Each collaboration was different, and because of that, each was stimulating in it's own way. I think this is the main reasons that the world of Dark Souls turned out as well as it did.

Of course, having said that, there was need for some direction, so in Dark Souls there were three main sections or themes, the image of Gods and Knights centred around Anor Londo, Lost Izalith and the theme of Chaos, Fire and Demons, and Gravelord Nito and the image of death and decay. I suppose you could also add to that the image of the ancient dragons. These themes, along with utilising the artists personal styles, formed the basis of the Dark Souls design principle. And as I mentioned previously, in contrast to most art teams, we didn't have our artists concentrating on a specific section, for example, this artist will work on environment, this one on characters and this one on equipment. Instead all the artists contributed to all of these areas.

Otsuka: So Anor Londo for example, wasn't created by a single artist?

Miyazaki: Not quite, we didn't have a single designer making Maps, Characters or Equipment, but we did have separate people in charge of each of the game's areas. I believe Mr (Masanori) Waragai was responsible for Anor Londo.

Waragai: Yes, I was the artist in charge of Anor Londo, but before we started developing the look of the area, we first decided on the general layout and then working together with the 3D artist, I set about designing the main features such as the statues and the revolving elevator.

Miyazaki: This is actually how most of the areas were constructed. The map design was really what dictated everything else, once we determined what needed to happen in each area we would immediately draw up a rough map, then once the basic layout of the area was decided we'd work on the finer details. Through the rough map I was able to communicate the requirements, structure and appearance of an area to the artists, and have them develop those ideas through collaborating with one-another. I'm never satisfied with design work which simply follows the design brief, so I often requested that the artists and designers add some of their own ideas, I really believe that these ideas can enrich the area, if not the entire game. Although, this can lead to more work of course. Haha.

Otsuka: So you had one artist/designer and one 3d artist team working on each area, and then it fell to you to make the final decisions?

Miyazaki: Yes I suppose so, but each of the areas had it's own feel or tone, as far as art direction was concerned. for an area like Blight Town for example, we found that once we decided on the general direction and gathered together the appropriate reference materials, there wasn't really a need to spend too much time developing the look of the area, it just came together. However in areas which were composed of more traditional architecture we had to spend a lot of time working on the finer details. There weren't a huge amount of artists on the team so it was a case of moving people to where they would be of most use.

Anor Londo for instance, is one of the most complicated areas in the game in terms of architecture, and as the mid way point of the game it's also a very important area so we spent a great deal of time working on it. After ringing the bells and overcoming the traps of Sen's fortress I really wanted to player to feel "Yes! I've made it" I think Mr Waragai did a great job with this.

Otsuka: It seems that your direction was at times quite… abstract

Miyazaki: Yes, according to the artists it was, but I think, If your instructions are too specific, the designs you get will be somewhat devoid of creativity, so I try to give them just the most basic, essential information before handing it over to the artists imaginations, which inevitable eclipse my own. But my initial instructions are certainly abstract. For example, when designing equipment I'd simply say "Make Something you can trust your life to on the battlefield, or "Make something that has enchantments to protect you." I think the artists probably didn't know what I was talking about half the time. Haha.

Miyazaki: I'm sorry. Haha. Of course, If I don't get what I want, then I start giving more specific descriptions, and I might even start drawing things on the white board, but even then I'd never go so far as to say it has to be this colour or this shape. I don't want the designers to just become my tools. Of course, It doesn't always go as I want, but I think that's probably due to me not getting the best out of the artists, and this is something I want to get better at in the future.

Otsuka: It's similar when I put a book together, I understand how you feel.

Miyazaki: With this game some fantastic images came from the initial concept stage, for example Lautrec's "Armour of Favour". If we had simply concentrated on what was required rather than trying to experiment, I don't think something like this would have been created. In order to get this from my designers I tried talking to them about all sorts of things, for example I spoke at length with Nakamura about philosophy.

Waragai: You spoke about space and stuff too right?

Miyazaki: Oh yeah! especially at the beginning. About the world, life and death, and with regards to the game world, the meaning of fire and role of the four kings. By talking like this with the artists I found it not only helped them develop their ideas, but it really helped me shape my idea of the world I wanted to create. I also tried hard not to be predictable or conservative. Of course we decided on a fantasy setting so we couldn't stray too far from that, but we had to be careful not to just take the easy route or the world would become boring. I really tried hard to maintain this.

Otsuka: Is there anything else in particular you tried to avoid?

Miyazaki: You may not believe me, but I always tried to maintain a certain level of refinement and elegance in all the designs. I often told the artists muddy or messy is definitely *not good*. I think this carries through the entire game, of course if you asked me to describe what this "elegance" is… well I think you just have to look at the designs and judge for yourself, but it really is one of the most important factors in everything I oversee.

Waragai: I remember you said that to me when I was working on the zombie dragon. Originally it was covered with maggots, but you told me that I needed instead, to try and capture the sadness of this great creature as it marches towards extinction.

Miyazaki: As I said before, everything has it's particular shade or tone, blight town for example is the rawest, most disgusting area in the game, but looking at the area as a whole, I wanted it to feel both bitterly cold and possess a deep sadness, and that's the atmosphere I tried to build on. You could say I have a habit of working in this way, and I think you can really see that in Dark Souls' art direction.