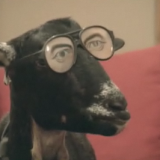 So I remixed a Midnight Brown song, sort of.

I don't know if it's been done before, it probably has, but I tried it out anyways.

Yesterday I decided I would make a song, like usual, but I would sample the beat from "My band is putting out a seven inch". About halfway through the song I thought it would be cool to add the lyrics. So I did!

It was a little tough to isolate the voices and the rest of the song still kind of sounds through, but I matched up the beats to make sure nothing is really changed. They sound like they're coming out of an old radio, which I ended up liking. Without the stems there's only so much I can do.

The actual beat is glitchy, I reversed snares here and there, copy, paste & duplicate were used a lot for variation throughout the song.

I'm quite satisfied with it, I'm posting it here since I know ya'll be Midnight Brown fans, or at least some of you.

Thanks to Midnight Brown for the awesome beat!

Blogs Created:
1 blog
Most Commented blog:
So I remixed a Midnight Brown song, sort of.
Total Comments on blogs:
146 comments