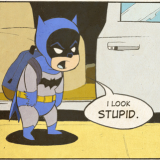 Who says next-gen consoles are needed to make better games?

If you frequent the site you've probably seen many comments regarding this , even the GB crew has dealt in this topic and the argument is that "games are not delivering what they're intended to do" that "console hardware can't keep up" or that "this year has been dissapoiting because of done already nature of many games" , wich then brings people to say that we desperately need a new generation of consoles is kinda weird that people associates better games with new hardware somehow that dosn't seem right to me. We just need to take a look at the launch of this generation of consoles, for a while it didn't seem as if anything had change sure we got better looking games but most of them were just games ported from the previous consoles or some were just proof of concept that didn't scream: this is what the next generation is about.

My argument is only focusing on games here, because there's no denying that this generation of hardware evolved the way consoles games are played (Xbox Live , The wiimote for better or worse , Kinect , having hardrives on consoles and so on) . I´ll say it wasn´t until 2007 when games like Assassin´s Creed , Uncharted , Call Of Duty 4, Bioshock, Mass Effect and maybe Gears of War the year before began to proove what theese consoles could do and what set appart the new generation as far as doing something that older consoles weren't capable off even then some of those games weren't really delivering what their developers intended to do until the sequel came arround (Assassin's 2 ,Uncharted 2, Mass Effect 2 to name a few). So what's driving people to say that the fact that one game demands to download a texture patch in order to play the game "right" is the reason to what we need new consoles? will a game like Assassin's Creed benefit from using a better hardware? it'll be the same core experience regardless of the improvements (better textures , bigger worlds, better crowd IA), what makes people think that having a PS4 or the Xbox360-2 means that games will somehow have better than the ones we're playing now? at best it'll take more than a year after the launch of the next-gen systems until deveopers come out with great working ideas for games, to me gaming evolves with creativity, vision and pushing not conventional ideas to the front not by exhibiting technical prowess.

Lastly I just want to say that Im not agaisnt the idea of new of consoles but we do need to think about what does it mean and if doing the jump inmediately will really bring better and new ideas to make even more great games than the ones we´ve right now, oh also if you´re a PC oritented player please retain yourself for making the obvious comment as to why you don't care about it or dosn't affect you we know it and you know it so leave it at that.

Please excuse my grammar and share your thoughts Im really curious to know what's your take on this.