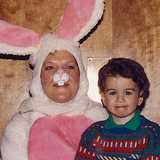 I've been a Giant Bomb regular for years now. I don't post on the forums that often, but I have added to the wiki when I have felt motivated. I loved the original Guild Wars and although I don't have tons of time to play GW2, I would like to at least start logging on regularly, although it may be for brief periods at a time. One of my favorite Giant Bomb moments of late was the Unprofessional Friday when Jeff was away and Vinny got weird with Day-Z.

My Guild Wars 2 info is AngryRedPlumber.4108

It speaks to Ryan's character that we are all so moved by his absence. I sincerely hope that his family, friends, and fellow duders can stay strong.

PAX East 2013 was my first experience with PAX, or any gaming convention for that matter. Upon arriving at the convention, I immediately noticed a trend: bad hats. I don't mean novelty foam cowboy hats, cosplay helmets, or those weird animal beanie things, even though those were all quite ubiquitous at PAX.

Let me clarify, these hats aren't intrinsically bad. They are just unbefitting of a goateed 20-something wearing sneakers and a hooded sweatshirt.

In all honesty, I mean no ill will towards the wearers of such hats, or anyone in these photos. I just find it fascinating that these hat-wearers seem to come out of the woodwork for such an event. I had not realized that the gaming community had such an overlap with the bad hat loving community. It was a fun little challenge to seek out non-baseball-hat-wearers and snap their photos over the weekend.

Anyway, I took some photos. Feel free to share yours... for the love of bad hats!

This wonderful. Seriously, spot on.

I am going, although the Saturday passes just sold out, so I will only be attending Friday and Sunday's show. It will be fun to check out some sites around Boston on Saturday, though.

I get the following error message when I try to upload more than one image on a given wiki page. I can only upload another image on the page when the previous one has been approved by a moderator. Is this intentional, or is something wrong? I am on a Mac, using Chrome. I have had the same issue with Firefox. Sorry if this is covered somewhere on the editing FAQs, but I didn't see any mention of it.

Both concepts, Elevator Ambush and Elevator Sequence seem to describe the same concept. I suggest combination! I actually think the alias, Elevator Fight, is the most accurate name for this concept.