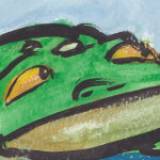 I've got little to show for how much effort I put into the AV capture setup. Why? WHY WOULD I DO THAT?

This little beauty is one of many titles attempting to cash in on the success had by good digitized fighters like Mortal Kombat. Sticking with a bizarre combination of horror and mythology the cast includes a Frankenstein's Monster named Deathmask, a bird-demon whose wings appear to be made of plastic garbage bags, a man whose head is detached from his body and a claymation cyclops names Strawbelly Jam whose knees sometimes extend pointy spikes.

The domestic US release changed most of the names for clarity's sake but I like Heart Heat Harn. It's much better than "Headless Harn". Phht. Also, "HI!".

... Or lack thereof. I've yet to find the optimal settings for my capture card and even then whatever's pulled will never be pixel-perfect. Interestingly the card does possess an accelerated mode which sharpens the image and makes everything a little brighter/clearer but it only affects screenshots. There's a problem, however, in that it completely screws up the aspect ratio. It zooms and crops off-center, often removing about 10-20% of bottom edge. This is unacceptable so slightly dimmer/squishier it is!

Emulation can and does provide clearer material but can introduce all sorts of flaws not present when a game is run on real hardware. Sometimes it's as small as additional stuttering and slowdown. Even commercially produced ports often suffer from framerate hiccups not present originally. Often there are minor differences in audio quality. Usually it's just a few hard to notice pitch variances but then you get something so off-key it becomes painful. I really, really appreciate the newest Splatterhouse including the old arcade and Genesis titles but their emulator for 2 and 3 has the worst audio reproduction I've ever encountered. The opening of Splatterhouse 2 sounds fantastic on real hardware and you'd never guess that from the port. The elevator is also a source of pain due to the yelping hopping monsters. SCRRRREEEEETCH! Most debilitating of all, however, are graphical glitches. Certain emulators just hate certain titles. Jaki Crush Pinball's table nearly always dissolve into graphical sludge and that sure as hell doesn't happen with a physical SFC/SNES. The high-score table just explodes in The Flintstones and the menu in Spiderman is indecipherable.

What I snag isn't the best it could theoretically be but there's something to be said for showing off how games run and render in their native state. I appreciate roms and emulation for preserving aging and hard to find titles. Boards die, batteries lose their charge and discs can't be trusted to run forever. There's also something to be said for the ability to try titles that would normally be unobtainable. I own a Jaki Crush cartridge but if I'd never tampered with Super Famicom ROMs I'd never have known it existed. Most of the 16-or-under bit titles I own were sought because of emulated experiences. Why would anyone suspect offhand that the Famicom edition of Rampart is nothing at all like the US and European titles sharing the same name?

My fascination with "real stuff" isn't the product of elitism but of wanting to share what I can as it originally was. I like collecting stuff so why not do something beyond just hoarding it?

Excitement! Danger! A lost crate! An... octopus? Dammit, Giveson, take care of your undersea equipment or next time the sharks are getting to keep it! Thunderbird 4 handles like Gordon's been out all night drinking and the crane is quite fiddly as may be inferred. Also, secondary fire (poofy missiles here) is dependent on direction and speed. Despite any griping, however, this is probably the best Thunderbirds game ever made. At one point later on giant ants show up and try to eat the Mole...

It's P-47: The Freedom Fighter, the PCE home version of the arcade's P-47 Thunderbolt: The Freedom Fighter. Honestly, given with how cheerfully peppy the music is the name change makes sense. Blue skies, lovely sunsets, scenic mountains... it's supposed to be based around France during the Second World War but it seems so damned happy. Bizarre. Also, the title screen is a cute little airshow of most of the planes and other aeronautical craft featured in-game.

Criminals here! Also way too many lemonade stands built too close together. Who thought that that was a good idea?!

This relatively obscure title is an 'enhanced' edition of the Super Famicom title of the same name. Also known as Cybernator on the SNES, Valken is a competent side-scrolling platformer featuring the mechanized suits alluded to in the title. Despite a decent soundtrack, however, the controls in the PS2 port introduce an uncomfortable amount of floatiness which makes the game harder to play. Amusingly, upon death the higher resolution graphics tend to dissolve momentarily to reveal the originals they were applied over. QUALITY!

Forget Chase H.Q., this is the real star of the collection! Action! Drama! Little pixel dudes who sound kind of like walruses falling over and having spasms! Okay, so it's just a Breakout clone with a football theme. At least it's more original than Off the Wall.

Well, this is awkward...

AAAUUGH. The queen of the goobers still requires something extra to bolster the composite signal. The PCE does admirably but the Genesis... just... can't. It's awful. I tried using Art Alive as a tool to tweak the colors and correct them to something bordering acceptable but all that led to was a headache and that horrible music being stuck in my head. I did get to satisfy my curiosity over whether Art Alive could technically use the Sega Mouse despite not being designed to support it.

Get out for Revenge, for the endtimes commeth...

EA continues to endear itself to the masses by being managed by a bunch of cheapass bastards who are taking more online services for their games out back to be shot. Some of these things aren't that old. Some of them are reliant on user-created material. Some of them are games that I actually like.

Sooo... when is Create's retail page (among the other victims) getting amended to reflect the loss of its content sharing features? Someone needs to.

Granted, the casualty I'm the most annoyed about is Burnout: Revenge. Paradise is a fine title in its own right but both games have their own distinct feel to them. Revenge has much more in common with the arcade titles of yesteryear which Paradise just... doesn't have. Crash mode is completely and utterly ridiculous but it's fun. Crash partiers, party hard, for soon this mode will be lost forever.

I never understood corporate EA's insistence on running their own servers on everything. It provides them with a higher level of control, of course, but why is this strictness a necessity for racing titles? It obviously costs them money which they are not pleased to part with, hence the terminations. Relaxing their iron fist would allow more funds to be allocated to titles whose existence requires a controlled server such as Create or the myriad of sweaty men hitting each other fantasy league-type games. Not even the much-prattled-about online pass managed to spare MMA a bullet to the head.

This isn't even getting into their "let's run this shit into the ground" practices of fostering quick completion times on products resulting in terrible or at least questionable sequels to previously lauded titles. Or day one on-disc DLC.

Their logo is becoming more of a badge of shame than anything else.

The worst thing is, because of a handful of idiotic business practices and shady dealings some consumers are going to be turned off from legitimately good titles. The Mark of Cain EA will cost some hardworking and skillful men and women from reaching their audience because of their publisher's frustrating behavior.

Congratulations! You be the smart people EA! Yaaaay!