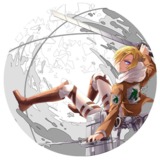 Glad to hear your story duder. I made the trek to bronze 2 days ago with similar circumstances to yourself.

I was always interested in fighting game since I was a kid seeing them around malls and other places. The thing that made me look at SF in a new light, (considering I was like 3 years old when real arcades dissappeared), was that Daigo parry video. I had no idea what was going on but I knew something was there from the excitement in that room and even in myself. I tried emulated SF2 but had no one other than my brother to play with at the time.

Eventually HD SF2 came out on the 360 which was my first foray into the SF competitive side of things with the horrible lag asside, I had a ton of fun getting my ass handed to me (I'm sure I won 1 or 2 rounds somehow) and then when IV came out I was playing against my cousins and some of my best friends.

The training mode and challenge mode in IV on the other hand is where I probably learned the most though. Practicing for hours figuring out how to do cancels and input things with the proper timing. Even though I was bad at the game I was addicted to it.

I caved in on SFV seeing Jeff and Jason ranking other fighting games and seeing their excitement playing the beta made me want V really bady. I got it at launch and have been playing every day as M Bison online which is my best character at the moment.

Sitting at 500 LP and bronze league right now if anyone wants to play with a newer player feel free to bother me on PSN @ Idion1 or Fighter ID: Zenden, hopefully I didn't bore anyone with my tale.

I am definitely a student, I know most of the basics but I'm at most just decent.

Find it hard to care anymore honestly, just like who shot first in star wars. I don't care and just wish people would let it go.

I actually think the ps+ games we get are actually pretty decent so I have no issue paying for it. The xbox on the other hand seems to usually have complete garbage for games so I never pay for xbox live anymore. It's all subjective though, I can see some people hating most ps+ games.

It seems like a decent way to hear dan and drew talk about random stuff, (sorta like a podcast) and as others have said you would not have as much of a frustrating time watching it. I stopped watching because after playing that game for 70 hours watching someone else play it is the LAST thing I want to do. Especially when dan is holding drew's hand and seemingly forcing him to play a certain way, saying "The riot smg is the best weapon in the game! I used it all the time" may not seem like forcing him but drew listens to advice and assumes after playing it for so long dan knows what he's talking about. The game TRULY shines when you just fuck around doing random stuff but that is lessened with dan there. So I guess I should say you should probably just wait and play it for yourself if you are planning to.

That was a longer answer then I thought it would be....

I loved it completely for awhile after finishing it, I wasn't upset about how the story was done because I played a lot of peace walker and expected that. For some reason though after thinking about it for awhile i've come to realize that frankly I was disappointed with the story, not the amount of it just the story in general. The game is very fun but I have felt zero interest in going back to play more because after awhile the side ops are just the same thing over and over. I love replaying metal gear games but just like with peace walker because it is so long I won't feel like playing it again for a long time. It is one of the best games of the year but it isn't as amazing as people made it out to be so I think it's partly because of how much praise it was getting, no where to go but down from there.

@wrighteous86: I find the Cloud in smash bros thing isn't all that crazy with the remake coming out. Also it is actually waaaaay crazier that Sonic has been in two smash bros considering their history with that character.

Griffin McElroy, Justin would be pretty great to have back on as well

I am freaking out internally over this news, KOTOR 2 is an amazing game and I can't believe they did this. The first game is my favourite video game but 2 is sooooo good and I am really happy to hear that you likd it so much Austin.

I used it for a few days but quickly realized it was a waste of time, I only care about the GB ones and they always get posted separately anyway