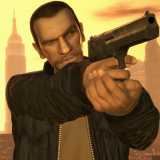 Few years back, few months after breaking up a 2 yr relationship the ex girlfriend blamed me and shot herself on my voicemail.
Next six monthish I drank too much and had alot of casual manwhorish sex.

Mostly got over it, at first the hallucinations in deadspace 2 of nicole literally made me dizzy and cold sweats.  I was enjoying the rest of the game....

Played more and well...it gets worse.

Debating selling the game and not dealing with it, or banging through the game just to prove to myself I'm fine.  I'm rambling but oh well.

Long story short, played semipro football defensive tackle, team went bankrupt, I went from fat to OH FUCK FAT!!! So when I found a new team for next season (and potential to play dline and fullback) I lost 100 lbs since April first.

When I run/lift/in bed halfway asleep/playing games, I got into the routine of listening to old bombcasts.  I have already heard them so I can zone out and not miss much (time sensitive stuff usually), but still catch often forgotten hilarious moments.  It just works well for me.  So the time has come for me to cycle back to #1 and I will be throwing down a few things about each episode.  Why?  Because I'm a weird asshole?  Plus obscure predictions that come true are usually pretty awesome.

Next blogpost/threadpost (sorry I always get confused on if future blogposts are counted as new threads or just new posts?) will be on Arrow Pointing Down "Beta"