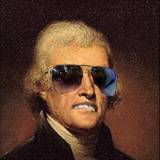 Hotline Miami is a Masterpiece: Part 2

Note: this article's a bit of a pictorial in order to give people who haven't played the game a good idea of what is going on, as well as to make sure everyone who has played didn't miss any of the clues I'm talking about. Part 3 will be more text and fewer pictures, I promise. The main body of text can be found at the bottom, under all the pictures. Also NB that this article is chock-full of spoilers.

Well, I did it. I finished the game, got most of the masks, and saw the extra content on YouTube (I'd rather replay without having to hunt down little tokens). She's a doozy alright, but let me catch you up on the first half of the ending: the psychological thriller and twist.

As I said in Part 1, the game is unforgivingly violent and it takes some getting used to. Especially since at first you're not sure who it is you're killing. After you clear one building, the phone on the 3rd floor starts ringing and you pick it up.

That's enough to digest for now. I've skipped a few steps in the story, but you've now got all the main beats up to near the end. I'll leave the very end to Part 3, but let's take a look at all that happened here. There's something quite interesting going on in how the gameplay evolves to perfectly match the tone of the story.

First off, your worst fears come true when your character starts going more and more insane. As you unlock more weapons and masks, your kills also get faster and more brutal. By the time you make your assault on the police station, you've probably unlocked some of the better masks, giving you superhuman powers to kill with any thrown object, or move even faster than normal. Using these powers you're an unstoppable force, and as one that doesn't speak the player is left guessing how much sanity there is left. This is very effective in preserving the dark tone in the later levels as the game becomes more outlandish, as well as keeping it edgy and uncomfortable as the player gets used to all the violence in the game.

A crucial turning point comes when the shopkeepers stop all being that one same "friend" of yours. Until this point, the quiet visits to collect your payment[1] have been a welcome break from the intensity of the missions themselves. The camera moves slower, the music is pleasant, and the man behind the counter knows you. All is still well. As soon as this is removed, the player is given no quarter as their character descends into cold madness. Every mission until your eventual triumph over the Russian Mob is a sick revenge fantasy that's both engaging and repulsive.

I'm not going to give away the end quite yet, but know there's another twist coming. As you've guessed from what our motorcyclist friend is discovering, it's not just the Russian Mob behind the calls. Stick around for Part 3 sometime this week.

[1] I'm thinking that in your "payment" is also a new rubber mask-- this would tie in well with how you unlock a new mask at the end of each level.