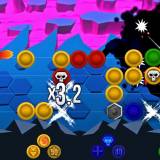 Yes, I am posting a blog. Feel free to express your shock

After my buddy Darro did a list like this last year, I decided to make one of my own, chronicling which games I completed in the year of 2009. While I had no set goal in mind like Darro did (his was beating 40 games in 2008), I still thought it would be interesting to see how many games I casually beat in a year.

While I know it may seem like cheating, if you will, to include the same game on the list more than once for different endings or different difficulty levels, those endings and difficulty settings often create an entirely different gameplay experience when all is said and done (not to mention require just as much time, if not more, than the initial playthrough), so yeah.  Here's the list:

In the process of less than five months (late November to mid March), I went from completely last-gen to owning all three current gen consoles, something that I never expected would happen, and I know that I am incredibly lucky to be in such a position where dedication on my part and the support of those in the industry proper allowed things to fall into place.

With Q1 of 2010 looking to be one of the best first quarters ever, it’ll be interesting to see if my total is topped next year. Only time will tell.

Thanks for reading guys – hope everyone has a very Happy (and safe) New Year’s!

So, I got a review code for Zombie Apocalypse, and while the single player is rather lacking, the multiplayer is a lot of fun. Figured I'd make a note here that if anyone else downloads it and wants to play (up to four players can go at once), let me know and we can kill some zombies together!

Also, if anyone's interested, I have reviewed Mini Ninjas.

Blogs Created:
48 blogs
Most Commented blog:
It's not a 360, but it'll do... Updated with story.
Total Comments on blogs:
416 comments