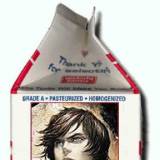 That was simply amazing how they wrapped the season up. Bravo Telltale, you come a long way from Strong Bad's Cool Game.  Can't wait for Back to the future

It's taken me quite some time to reach this point of level-headedness on the subject.  For the longest time, I would get rather aggravated by other people having the notion that Terra Branford was the main character of Final Fantasy 6.  I can understand why people could think that because of the fact that she has most of the traits of a Japanese RPG (and more specifically, a Final Fantasy) main character:

I have now realized my anger at this notion was due to the fact that there is no central character in that story.  If you really want to call any character in that game the main character, it would be Kefka.  But trying to call someone from that game the "main character" feels like you are selling the game short.  Final Fantasy 6 goes out of its way to introduce a ton of characters and makes you play multiple sections with 1-3 characters. I, personally, found Edgar to be the most interesting character.

I think that the best testament abbout the game is the same one i gave to 2001: A Space Odessey (which I HATE for its terribly slow pacing): any form of entertainment that can elicit such emotions from me must be doing something right.  It's the forgettable stuff that falls away.
2 Comments