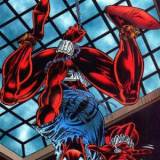 Seriously. I just finished this saga yesterday, and OMG, so freaking good! It's Cosmic Marvel at it's absolute best. I'd put it up there on the list alongside The Infinity Gauntlet and The Dark Phoenix Saga, it was that good, IMO. And classic Jim Starlin artwork.

It was very thought-provoking and entertaining. In addition to introduction The Magus, it also introduces Gamora and Pip The Troll, and gives some insight into what exactly Adam Warlock's Soul Gem is. Plus the appearance of a surprise villain. But the main-event here, is definetly Adam Warlock vs. The Magus. I can't explain it, really, without giving away the story, which is half the magic of reading it: Figuring out the pieces as you go along.

If you're a fan of cosmic stories and super-hero comics in general, I highly recommend picking these issues up. And you better do it while you can. I have a feeling that some of these issues are gonna start rising in value (just go see Avengers to see what I'm talking about, and stay for the end).

An absolute masterpiece! Fantastic gaming experience that I thought had gone the way of cartridges and wired-controllers. It looked 8-bit, it played like a 2D Metroid game (gameplay that was very reminiscent of Super Metroid), and had a sometimes quirky story. If you like Metroidvania games, then you'll ABSOLUTELY ADORE this game. I can't recommend it enough. Download it and play it!

It's a great site for game collection cataloging. You will find nothing the site doesn't have listed. And it accounts for variant releases and different region releases. It keeps stats on your collection/wishlist as well. Great tools for the collector, and it's all free!

You have to click "View Collection" at the top of the page underneath "BurningDoom's Profile" to see a complete listing of my games.

To see my full stats, click "View Complete Stats" under the bar graphs.

It's not much, but it's every game I want for the system, and their all mine now! I just purchased a large chunk of games, completing my collection. My first wantlist completed for an entire system that wasn't a dedicated console:

For those of you wondering: I don't have Samurai Shodown 1 or King of Fighters: R-1 because they're far too expensive, and I'm not THAT big of a fighting game fan. So I have no interest in them.

-Free extra PLAYABLE content if you own both episodes, which is supposed to tie into Sonic CD.

Sounds great to me so far! I enjoyed the first one, and this one sounds better.

I just got a Neo Geo Pocket Color, and I need some game recommendations.

What I got with it:

What I plan to get:

Anything else essential that I need for it that I missed? And I don't like card battle games, so please don't recommend those.

Recent Additions to My Retro-Game Collection

What's up everyone? New to the site. I just started a profile earlier today. I learned about the site through Darkadia.com.

I'm a lifelong gamer in my late 20s. I grew up on the NES, Genesis, SNES, and PS1. And though I have XBox 360, Wii, and DS, I'm a lot more of a retro-gamer than I am a modern gamer. I'm also a game collector. I own a number of systems and games and I'm always on the hunt for more. I tend to prefer action-RPGs/Western-RPGs, 2D platformers, shoot-em ups, run-n-gun games, and beat-em ups, with a sprinkle of first-person shooters (mostly pre-Halo, Halo included).

Outside of my gaming: I'm happily married and Christian. I was born and raised in Northern California and still here. I'm a metal-head, a big comic book fan, and I'm into sci-fi and horror movies.