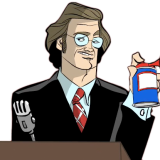 This game looks alright, but some bits like the road going off the land mass and causing falling and that one present landing from the tree off the land so it can't be picked up are a bit annoying.

Definitely like the new breadth of world styles, new enemies and I think adding in more things to interact with is really great. the beat stuff in particular would've been a great addition to the original game.

@tevor_the_third: Yeah I played this first on the ps2 when the Snake Eater re-release came out, and I was pleasantly surprised with how Metal Gear it is and how good it is. It really suffers if you don't pay attention to the layout and ignoring the radio doesn't help. I just think it's from a time that required more trial and error, but I don't think it's anywhere near the worst of this era. There's also a ton of hints and help that aren't cryptic if you use the radio (outside of where it is intentionally fucking with you near the end).

For example, when you fight shotmaker, Big Boss tells you to punch a door to get your gear if you call him. It's not meant to be an ongoing mechanic, much like a lot of the later games have some weird specific mechanics around being captured, because you don't have your stuff.

I don't mind if you do whatever to continue progress. The only thing I'd suggest is that if you find yourself trying to replay from the start to have more continues, just turn the lives up to 5 per continue.

Rogue Legacy is a game that I was really skeptical of, even while it was receiving endless reoccurring praise when it came out. I finally bought it on sale on steam and didn't enjoy it at all. It felt like it hit the perfect combo of feeling like I needed to grind and procedural design and action that seemed at odds with each other.

I have a great distaste for requiring grinding in real-time action games. It always feels like a bad trade off so that a game can have more replayability in exchange for less tight encounter design. It's turned me off in stuff like Darksiders 2 and Ys Origins, and it did the same thing in Rogue Legacy, except the grind is also tied to dying which is a intrinsically negative feeling thing. I always felt like getting better meant dying a lot, rather than feeling like each death was a chance to improve. After my first few hours, I extrapolated out the rest of the experience and decided to avoid it.

The encounter and level design also felt at odds with the character. You have this early Castlevania style character, with a slow swing and constrained movement, but it felt like every enemy would fly at you through the ground without much chance to eliminate them. On top of that, your ability to block was tied to an MP meter allowing only a couple blocks until you ran out. I guess you're supposed to rely on the dashes more, but the skill chests I managed to get on my early runs weren't dashes! Even when I did finish a room, it didn't feel like I was beating a proper challenge and experiencing a ramp up towards an end point, it just felt like one of many interchangeable rooms.

I know a lot of people love it, so I'm not trying to say it's bad. I even know that it's a game that you can master on a completely skill based level without engaging in the leveling stuff. I just had an experience that really turned me off from wanting to continue to invest time into getting better at it.