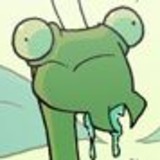 how stupid/wrong of it is it that i'm strongly considering buying a $400 console just for one $60 game?

I'm considering it for two games: Forza Horizon 2 and the Master Chief Collection.

Shit, maybe I should just get a Xbone. You lose, Sony?

Yeah, I bet. Meh. I guess I will not be even trying this one, then.

You are a genius. This is in my favorites now.

EDIT: Preface Alpha - Patrick, you've already touched lives as you say you wish you will. I am one of them. Thank you.

Preface - I feel ridiculous hitting send on this after thinking about how much of a right I have to feel this way, but I can't help how I feel, and I think it's nothing but praise for the man that will always be remembered as Ryan Davis.

I watched some old quicklooks two nights ago. Ryan and Jeff jams. Old stuff that I don't really care about - I was having a bout of insomnia and I love listening to Giant Bomb. Anything. So I found some old shit I never watched, and a lot of it was obviously including Ryan.

I will never forget Ryan, and Patrick - I am sorry to think this as I don't wish permanent mourning on anyone ever especially someone I have utmost respect for - I don't think you'll ever forget Ryan. You don't forget people like that. You forget how it feels to go from them being around to them being gone. You forget the sadness. You will always remember the good times because you have no reason not to and THAT is what is most important and most BEAUTIFUL about Giant Bomb and Ryan Davis. Ryan will never die so long as Giant Bomb lives. People will continue to discover the site, fall in love, and hit the back catalogue.

One of the best silver linings I've found is that the world will not forget Mr. Davis for the foreseeable future. I know Giant Bomb won't allow their archives to fall to the wayside, and I know people will continue to discover the site and Ryan in due process. People like the staff of Giant Bomb that positively affect so many peoples' lives - people like that deserve to be remembered, and I think that's exactly what will happen for all the right reasons.

I still think Ryan is somewhere either in heaven or some crazy simulation future sitting there laughing at how emotional everyone got over him. He'd be just the person to find heaven and spend his time watching his old pals endure the ridiculousness of life while knowing how peaceful and serene the following is - I'm sure that would tickle him to have that knowledge over the crew.

Got nothing to say but my best wishes go out to him.

Do you, Vinny. You can make it happen wherever you are. Giant Bomb is lucky to have multiple frontmen, otherwise this would be a doomed endeavor.

I am excited. I don't think I have ever disagreed with Vinny, so I can't imagine his presence over GBNY would be negative.

Not what I would call it... interesting though.

My heart sunk quite fast reading this headline.

Here's hoping the Oculus guys retain creative control or leave and are able to create a new device with what they've learned and the $2bil. If nothing else, we have Project Morpheus?

Sorry but I will not use a virtual reality device created by Facebook.

I think it's referencing being a slave to the culturally dictated progression that, yes, includes highschool. But think bigger than highschool. You are a slave to your chair at so many points in life now - as a very small child eating, as a student from elementary school til college/university, and then as an employee until you're a slave to a chair due to old age.

In broader strokes, you're a slave to what your culture tells you that you must do to grow and progress.