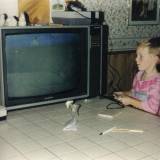 - Stepped on a wasps nest. Got swarmed, got inside my and my siblings clothing, ran inside the house, house filled with wasps that were camping out in our clothes. Half my face was swollen, couldn't see out of my right eye.

- Numerous jellyfish from playing around in the ocean. Those are pretty nasty, but not anywhere near how bad the wasps were.

- Fire coral while scuba diving in the Florida keys. Scraped the underside of my arm against it, arm felt like it was, uh, on fire. This was worse than the wasps because it hurt for about six months, at first with the burning, but then it just itched like crazy. Hated it.

- Bit by a rattlesnake on my honeymoon. This one was the worst by a long shot. Got to a hospital pretty quickly so no permanent damage, but aside from the physical pain (which was spectacular), the non-insured bill that came afterwards ($20k) gave us a case of the bankruptcies.

It's sitting right next to me on a shelf. Haha... enjoy!

I have been listening to the Bombcast for about three years now. I became a member and subscriber the day they announced that I could just give the site money. This is my first post in this community.

Have a lovely evening, guys.