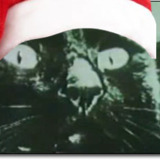 I honestly have no idea! There are some usual suspects that I could see show up, but Danny sounded kind of thrown off by it, which makes me think it’s not something like, say, Mr. Do.

I would love some podcasting between Dan and Danny, or Jeff and Dan if they were to watch more anime. One thing with Danswers was it sort of got too real. Some people wrote in about some heavy stuff, that arguably Dan and Danny shouldn't be the best person to address those issues. (I think they even mentioned that at one point, in one of the later episodes) It was that and how a handful of questions kept coming back to, "You should go see a professional and look into improving your mental health".

The HotSpot is primarily nostalgia related topics, guys talking about tech, and occasionally games. Sometimes there is a theme (there was one where they ranked previous GOTY lists), but sometimes it's just them hanging out.

There was a few times where I thought, "Boy, they sure are talking a lot about repos and hard drives lately", but it is overall some good podcasting.

Giant Bomb also really helped me out through the pandemic. Whether it was the Lockdown streams, recurring shows like Minecraft, Mass Alex, We Be Drummin’, the podcasts, or just turning on GB Infinite late at night and seeing what pops up.

Got teary eyed during the farewell stream. Straight up bawled at the end of Alex’s Rock Band stream.

I believe it originated from The Sims 3(?) E3 show. I know it’s based on the Sims plumbob, but I think the actual origins was some endearing joke that somehow caught on during E3. There’s a picture of Drew doing that somewhere.

It somehow transitioned to “peace out” and has been used by chat to say goodbye at the end of a live stream.

I renewed last night. Dealing with a lot of mixed emotions, but I wanted to do something to show some support for Jeff, Jason, Jan, and Bakalar.

This is a long thread already, but I remember Dan saying randomly, more or less, “I talk about wrestling all day long. People at Giant Bomb who hate how much I talked about wrestling, guess what, I never talk about it anymore”.

Part of it felt like it was in the context of he has a full time job focused on the WWE and when he’s off work, he doesn’t talk about work. Don’t think it’s some super, duper secret stuff, outside of general common sense “Hey, don’t talk about XYZ” with people outside the company, which basically every company has to some extent.

It’s probably not that big of a deal.

It's different, but it has the same vibe of whenever Jeff would say, "I was holding a copy of such-and-such 2 days ago" or "I was actually just playing such-and-such last night". Jeff seemed to regularly do something random and was able to bring it up in the context of a conversation on a Bombcast.

This is like the equivalent of that, but with stuff. Promotional items from 10 years ago. The original blah from 15 years ago. Some piece of tech from 20 years ago. It's almost like pulling back the curtain for how Jeff has been able to say all those things over the years. Sometimes he literally just picks up some miscellaneous thing the other day.