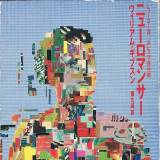 When does Dark Souls start clicking?

Hey guys. I'm new to Dark Souls and I didn't play Demon's Souls. I'm enjoying it so far. My class is a Wanderer, and I mainly use my original scimitar when I need mobility or the Drake Sword when I need to do a lot of damage.

I'm worried, however, that because I spend most of my time as a Hollow, I'm missing a bunch of drops. I haven't found any "signs" for summoning NPCs, or any other armor other than my original set. New weapons are few and far between, and I have a hard time believing that I'll find anything better than the Drake Sword at the moment.

Should I focus more on using humanity or should I not worry about it and instead focus on killing the fucking Capra Demon? When did you guys start getting deep into the game (upgrading equipment, joining covenants, PVP, etc.)?

A while back I saw that Chrono Trigger was on PSN. Now,what I am going to say is blasphemy, but here it goes.

I have never played a JRPG before.

I had heard that CT was one of the best, so I decided that I needed to start somewhere. (Yes, I know that the PSN version is inferior.) I am now at the very end of Magus's castle. So far I know I've made some rookie mistakes, one of which forcing me to retread the entire dungeon just to give Marle and Frog magic.

Are there any other tips you could give to someone who's new to JRPGs? I get the gist of the combat mechanics, but I'm sure there's some more subtlety below the surface.

By the way, what I'm about to write excludes the GB staff entirely. They are, by nature, grown-ass adults. (Well, technically.)

The games press is driving me insane. They're the most paranoid, selfish, mean-spirited, (possibly corrupt?) people other than politicians. They've turned what should be a reader-driven community into a war for clicks and attention. There's masochism, sexism, hatred and greed.

They're supposed to inform our decisions. But they only make us more insecure.

As you can see, it was glowingly positive. BUT WAIT! One of their former editors has reason to believe they have a bias. Wouldn't that be unfortunate! They were SURE that IGN's Nintendo team would give it a 10 before they left.

Editors CONSTANTLY make vague, passive aggressive shots at other sites. They accuse each other of bias, of stealing material, of using kamikaze journalists to get a scoop on CHARACTERS FROM A FREAKING FIGHTING GAME. Oh boo hoo.

My plead to the games press: Grow up. We come to you for guidance, not a soap-opera level of drama. If I can't trust you, then I will leave. Period.

I certainly don't have time for this crap. Do you?