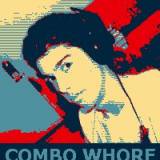 Playing some games while getting some school work done and chillinh with friends.

Also attempting to get in a decent shape for Quakecon in August so I can make my time worthwhile. Would hate to spend all 4 days just getting my ass handed to me...
Just picked up Fallout 3 on sale not too long ago so I'm also playing that.
1 Comments

The ending in my point of view

To not stir up and hatred or anything I agree with the one that posted this:

http://www.computerandvideogames.com/article.php?id=175552
However; the only thing that struk me while I was reading it was that he seemed fairly cartain that the writing all over the laboratory was all the work of Subject 16. I take to it differently, I think that the writing on the lab was not only the writing of Subject 16, but also the ones before him, Subject 15, 14 all the way to 12 because I think there was an email that specified the "Bleeding Effect" only occured to Subjects 12-16 and i gues now 17.
I came to this becaue in one side of the room, there are egyptian signs along with the square writng. then in the middle there is Chinesse (or japanesse, excuse my ignorance) architecture  along with the name "Yonaguni", a japanesse island. Then in the other side of the room near the servers there is a step pyramid (classical to the Aztecs) and a Valley which when I looked at the drawing on the wall of the monkey and the himmingbird I thought of the Nazca lines in Peru. So I think this is the decendancies of the different subjects and this, next to their writing, signifies the author.
That's just what I got out of it. But I give props to the author of the article on it on CVG though, that was really insightful.
1 Comments

So I own the PC version of Assassin'c Creed that I got off Steam for a great $10, at first I was skeptical but hell, those were some well spent $10. Now, don't get me wrong, by the title of this blog post it looks like i hate this game but on the contrary, I really like this game, what it does it does really well. The only gripe I would have to it, besides the other technical hops I had to jump through detailed in my forum post dedicated to making the game run as it should, is the act of congress you have to go through to exit the game. Check it, I even wrote down all of the steps youy have to get through to get back to the desktop:

As you can see, there is about 6 steps too many for this process. It frustrates me sometimes but heck, its a pretty good game so im willing to let this go, sometimes.
Do the 360 versions have this issue too?
14 Comments

Been playing the hell out of Team Fortress 2...

Man, ever since class ended I've been hopping back into games again since I hadn't touched a contr... keyboard in like 3 months. I hoped on some Quake Live and was quick to realize the I sucked really bad now, then I hoped on some CS:S and that confirmed my thoughts. I had been attempting to hop on an online title that would be alight to ease into back and then when I got my aim and reflexes back I would hop into Quake Live or some of those more competitive titles like CoD4.

I think the first steem-lifter was some CoD:WaW. The for some reason I dove into Team Fortress and not only did half way decent, but loved the team experience and feeling. I realized that one really must have a mic to be good at TF2 since everyone on the team communicating is crusial to the victory of the team.
Me getting into the game couldn't have gotten at better timing since a week later they drop the Sniper and Spy updates along with a free weekend. So not only was my friend going to join me in it, but me and him are achievement hunting for the new items.
So yeah  just kind of feel in love with Team Fortress 2 and will play the hell out of it this memorial day weekend.
2 Comments

World at War patches are HUGE!

I was happy to hear the otehr day that World at War followed in the steps of Call of duty 4 in the way that the PC version once again got the multiplayer Map Pack for free. However I was a bit shocked when i went to download the file, 581MB patch is a tad big. I mean yes, it includes 4 new maps and some fixes but not even the CoD4 1.6 map patch was that big at 281MB and it had one map less.

lol this is kind of just ranting about nothing but for some reason i felt it needed to be said. this i guess is bad for the time warner and comcast people that have bandwith caps.
6 Comments

To the business end

Yes, for developers it is extremely problematic since they are seeing all of this trafficin games that they are not getting accounted for.

As for the consumers it is really good since we are getting games and hardware at reduced prices.
Perhaps if one could sell back to the company it would be good?
1 Comments

really happy i made the cut for QOTW

lol i was on the phone with my friend watching the thing and i was like "man I hope i meade it" at first i aws like nah... but then i see my room and im like "holy crap! im on a giant bomb video!!"

I think the most reacent single plpayer experience would have to be Portal... Glados is just so awesome like that...

However, when I really sit to think about it, I would have to say CoD4 and Counter-Strike: Source would have to take some credit on this since I rememeber getting most of my laughs in games from watching or experiencing crazy headshots and insane kills in both of these games
1 Comments

In case anyone happens to be searching for a solution of why when their playing a game like Far Cry 2 or any other graphics intensive game, either their nvidia drivers crash or they get a blue screen. I had this probelm more spicically in Far Cry 2.

Played the game for about 5 minutes, Ultra High, insane frames, and then the game freezes out of nowhere and then exits out and im back to my desktop with windows telling me "nvidia video drivers have crashed  unexpectedly and were recovered"
Iresearched the topic and at first I thought it was due to the 90Mhz factory overclock but then a person in a forum said the thing that clicked, "tested the card, crashed when it hit 75C" right then I knew all i had to do i crank up the fan speed to 100% and then ran Far Cry 2 in a Window and then had GPUz on the side and the temp never went above 59C, no crashes.
So anyone that happened to Google this and come across this post, simply go to the nvidia control pannel and click "adjust GPU settings" and then in fan settings select "maunal fan control" and then drag the slider all the way to 100%, click apply at the bottom right and you are set. You should even hear your card's fan spin faster.
Hope this helps!
1 Comments

Using my GPU for things other than gaming? WHAAAAAT?!?!?!?!

Just wanted to put out there that there is one great Video converter- well avtually two but im going to rant about the one I use now. I want to say this because I spent countless hours attempting to locate a video converter that would convert my stuff so i could watch it on my Zune. Now I have found that application, for those seeking video converters seek no more. actually, you don't even have to open Google, its right in your PC! if you use an ATi or nVIDIA GPU you are in luck. Your drivers already come with one, ATi drivers have AVIVO video converter and nVIDIA drivers have- well, work with Badaboom.

I'm currently using Badaboom's trial edition but geez, i couldn't be more simple. Select the file, customize the output resolution, up to 1080p, and select what device you are transcoding to (Zune, iPod, PSP, BLACKBERRY, 360, ect.) and let it run. I wanted to use it because my friend gave me some movies and they were all in AVI and he even had some in Divix and Blu-ray format, these formats are not Zune compatable, so no luck until I got Badaboom. Badaboom took them all, I had Iron Man Blu-ray and it took about 45 mins to convert it to .mp4. The quality is amazing, I put it up to 720p because i didn't wanrt to see just a bar of picture at 1080p on the Zune and I got about 60 frames converting rate on my new GTX 260.
Badaboom is $30 and im consireing purchasing it.
2 Comments