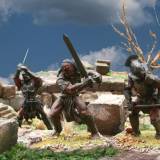 Okay, here I am sitting in class after seeing Ryan's review on Mirror's Edge, and before I saw that I was dubious about the game despite being an acrobatic Asian chick with cool glove(s).  From the looks of it the game is based entirely on freestyle running (those crazy peoples, they're great), and while there is combat it doesn't look like a main feature and I'll probably be running around like a headless chicken rather than actually fighting, and thus it feels as if it will incredibly fun, even if some of the jumping puzzles take some getting used to.