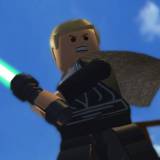 $5 off is ridiculous to begin with.

I went back to this game this weekend and am pulling my hair out.  The place is populated with so many clueless pedestrians and vehicles, not to mention the worst idea ever: no skate zones.  Whoever thought it would be a good idea to have people run up and push you off of your board in a skateboarding game needs to have a lobotomy.

Sure enough, one day after I posted this, there was a big XBLM sale, with half-prices on a lot of really good DLC.

I bought Undead Nightmare for $5, The Lost and Damned for $5, and The Ballad of Gay Tony for $10.   On top of that, there was a lot of Borderlands content on sale, as well as Bioshock 2.

They got $20 out of me that they wouldn't have otherwise.

I played The Force Unleashed, which I bought on the cheap.  I think I bought the game for like 10-15 bucks.  ...but the additional levels and classic characters, which sounded moderately fun, added up to way more than I paid for the full game...It was $40.  It just doesn't make sense.  I'm not heartbroken that I didn't get to play it.  I'm not saying that I deserve cheaper prices.  But someone lost out on my 5 bucks that I would've paid them to expand my experience.

I just checked on Amazon.  That game is selling NEW for $12.  Yet, the DLC $40 (not counting avatar stuff).  That's loony.   They should sell all of the DLC for 5-10 bucks and be done.  You can't continue to charge full price forever, because if I have $40 to spend, you're out of your mind if you think I'm spending it on DLC for an old game.  At that price, I can go get something fresh and new...that's kinda my whole point.
10 years ago

#5  Edited By davebgray
@Meowayne:
That's pretty much what I do.  I just mean as an industry, I think they need to re-examine their pricing structure so that it makes sense.  $60 for all games is unsustainable, when you can buy quality games on the iPhone for a dollar.  ....not that console games need to cost a dollar, but there needs to be some form of variable pricing.  For me, personally, I just wait until stuff drops in price for niche games, I'll get 1-2 games a year for the full $60 where I anticipate taking full advantage of the features, and I'll grab a downloadable title in there, peppered with a few iPhone games.  That's my gaming year.

@Enigma777:
As for GameFly, I've thought about it, but I don't burn through games fast enough to justify it, because I'm a completionist and I very rarely stop playing a game without beating it.  I have a backlog of games as it is that I haven't even touched.   For $15 a month, that's $180 for the year.  Since I rarely buy full priced games, between the bargain bin, online sales, borrowing games from friends, and buying cheap handheld stuff, I think I can do better.  Plus, I really like beating a game that I enjoyed and then giving it to someone else to play.
10 years ago

#6  Edited By davebgray
@Axxol:  Yeah, when you outlive Jesus, you start to feel old....for a gamer anyway.

@SuperSambo: That's not how it works.   You don't just pay what someone asks, when you can get it across the street for 1/5 of the price.   $20 buys me a relatively new game in the store.  Why would I buy DLC that's as costly as a brand new game?
10 years ago

$60 is too much for me to pay for games.  I just don't think they're worth it and my gaming style doesn't get value from them.  I'd rather play a game and move on, instead of playing multiplayer for 100s of hours on the same game.  I get that people do that and enjoy it and that's great, but it sucks that I don't, but I still have to pay for it.  Just because I can potentially get tons of hours of gaming, it doesn't mean that it's worth it to me.

I am playing Darksiders now.  I'm about 15 hours in and I feel like I'm getting pretty close to the end.  I may have another few hours left, depending on if I get stuck somewhere.   ...but I'm DONE with this game.  I'm enjoying it, but I'd ready to finish it and for it to be over.  I think that we've demanded longer games for value, but that's like wanting longer movies for value.  It's a skewed sense of quality.

I think that we need to get away from the "all games cost 60 bucks" mentality.  If you want to have a COD game with all of these features for $60, go ahead, whatever.  ...but why can't I buy a sindle player only version for $30?  The worst offenders are single-player games that have no need for multiplayer at all, but that's another discussion.

At this point in my life, I'd rather play 10 hour experiences for 20 bucks.  That's where I am.   I get some of that from games like Shadow Complex, but it's a rare find.  My time is valuable and sludging through repetitive gameplay to build length is irritating.

How much are games worth to you?

#8  Edited By davebgray
@BlazeHedgehog: You make a good point.   And while this is likely WHY MS does this, I don't think it's a smart strategy.  Yes, they are the only game in town the 360, but this generation is different.  Hardly anyone has only one gaming platform anymore.  $2 buys me Plants vs. Zombies on the iPhone.  The 360 version costs $15.  ...the "theme" costs $2 by itself.  The price difference is nuts.

I don't even care that stuff comes out at a high price.  New software always comes at a premium, but prices drop as goods age and demand drops.

I'm getting old. I'm 33 now and I don't have time (or the drive) like I used to to play every new game as soon as it comes out. This is actually good, because I've been picking up great games on the cheap and going through them one at a time over the last year. Since I'm not in any hurry, I can wait for a sale and get most of my games for about $20. I'll pick up the occasional full price release, but it's RARE.

I'd like to go back and play some XBLA games and add-ons, too, but these things just aren't dropping in price, so I can't justify spending this much, when for the same price, I can get full retail games (and good ones, too) that aren't that old...not to mention that I can lend and trade these when I'm done.

Once in a while, the Marketplace will have a sale for the week, but then it goes away, or it's something really specific (like songs for Rock Band) or crappy games. They really need to put a pricing structure in place so that they can get some of my money. I look at Steam and how they have these great discounts and I don't see XBOX following up with this strategy. Why? With digital media, it's all profit. You'd think that they'd rather have me paying for digital copies than going to the store.

I guess my point is, that I'm waiting for XBOX to get some system in place for permanant price drops -- a digital "bargain bin", if you will.

I sold my copy of Halo 3 a while back, without getting many of the multiplayer achievements.  Now that I'm playing ODST, which uses (what looks like) Halo 3's exact multiplayer, can I continue to work towards my achievements in the original Halo 3?

Also, are people in both games playing against each other, or are they separate game pools?