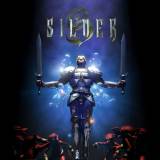 ouch, what a question!

i suppose it would be something like age of empires (1 and 2) and Day of Defeat (Not the source version) - man i clocked alot of hours playing those
theres also Anno 1602, dungeon keeper, theme hospital and even roller coaster tycoon! i just can't pick one!
Fable TLC and unreal tournament is also on my list of funniest....

i know it sounds like im retro, but tbh, most retro games just are more fun then most of todays games :S

if i had to choose a game from today then ermm.......more then likely the Half life 2 series and Assasins creed!....then again theres also the sims 2 and project gotham racing series.......¬_¬

Sod it, there just isn't one that i would class as the funniest!

as much as i love to play retro games and even the 2008's delightful rack of graphical proess
i'd much rather play the games of the future, wondering where gaming is gonna take us etc
So bring on 2009's (by the looks of it so far) Awesome year of gaming!

i thought i was with guild wars....eve online....age of conan.....Vanguard.....you get the point
i'll give the game a 30day trial, see what happens, more then likely it'll flop when up against wow :S

As long as part 1 is "reasonable"

The only thing i don't like about this game is the Cellular stage - it goes far too quickly, and just feels like its a waste of time........

Anyway - im loving Creature a tribal stage the most - i even posted how i took down a epic in creature stage (i think im the first to do so) Thats dedication for ya right there! lol
I've not experienced the space travelling as much yet- the basic travelling to afew planets and learning the basic to terraforming, so i can't comment on it yet :P
Most fun i've had in a game in awhile - and able to get my friends creatures on the fly is also a very nice thing to have :D
i was alittle worried on the size of the downloading of creature - whats it at now nearly 6 mill? :S
Luckly its only downloaded around 3k of those, which im greatful as it didn't flood my system lol
the creature creator alone was awesome, and now being able to create all the rest is mindblowing with the amount of things you can do :D
i did a quick scan and THANKFULLY i didn't recieve any damn penis creatures of creatures bonking each other haha
add me a friend!
DeadlyPain
Drop me a comment if you would like me to add you hehe
1 Comments

Cellfactor when it was released showcased the Ageia PhysX Engine, and how a game would benefit from a stand alone processor purely for the physix of a game, and to be quite honest it was a complete waste of time, Why? well NVIDIA already knew about this technology and planned to build it into there new next gen graphics card and let the GPU deal with the processing power a games physix needs.

http://www.gamershell.com/download_19042.shtm <<<< Copy link into address bar to download the Full version "1.03"
NVIDIA Recently released there brand spanking new "Power Pack" which Finally unlocked the PhysX potential of the 8 - 9 and 200 series graphics cards, codenamed "The Force within" --- Click here to download
Alot of people have used this opportunity to retest the Cellfactor game but shocked to find the game refuses to play after installation often gaining the "Reality Engine - Fatal Error" message and refuses to go away.
Reinstalling the game or updating the DirectX doesn't work either, So why is it not working?

*SOLVED*
This issue has been solved after i personaly got fed up and after searching google and getting nowhere found the solution after trying to load "Reality Editor", my vista although fully upto date has not installed the "SDK .net framework 2.0" and this is the reason why the game refuses to work.
To download it click below:

Install that and the game shall now work perfectly fine.

*WARNING*
Even after doing this and getting the game to load and work, you'll be angered to know that YOU STILL CANNOT PLAY THE AGEIA MAPS that were created for use with the PhysX card, i can't find a solution for getting around this either, so all in all, it was a complete waste of time even doing this in the first place.

The reason behind this is now for someone out there to unlock the maps for others to use, as soon as its possible i will update this blog :D
*EDIT*
When i say you cannot play the Ageia maps i mean 3 out of the 5 maps are Blocked and cannot be played unless you have a AGEIA PhysX card installed.