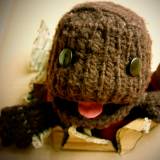 A site of discussion; no name calling?Thank you GB and community!

Okay, so I have only very recently started attending this site and even more recently I have started taking part on the boards. Fact of the matter is, usually I cannot stand the message boards. They all seem to be filled with Trolls, opinionated schmucks who seem to have a belief that their opinion is to be held on high (and will pick apart other arguments with crazy logic or just knocking spelling and grammar).

I was once an IMDBer, but well...fuck that! It is so full of bullshit I got tired of sifting to find intelligible thought and conversation, or I would find such gems stating great observations like "Britnys da beeest! Janaus Jooplin sux"...so yes, I was beginning to think that giving an easy outlet voice to the masses was being overcrowded by just angry rants and knee jerk reactions . And then there is IGN....the less said about you the better, you flame-war inducing hacks! We get it, you love Xbox...now run along to school...oh wait, whats that "Xbots are mega faggy super gay" or whatever stupid racist, homophobic comments you can think of...and by the way, if a game is popular and everyone loves it on the merits that it strives to achieve...it's over rated and that person is the only one who seems to know ANYTHING (see any Uncharted 2 or Halo post)

Essentially, if you could not tell, I gave up on the internet discussion...then I started actually reading the blogs here after I heard of the site, which I heard of when I had read about  the gamespot fiasco...somewhere, and while Jeff's (I think it was him) reviews never really leaned my way, down and out didn't like them, I had to hand it to him, man stuck to his guns and had some integrity...I come to find the same kind of thing with most writers here...I may not agree with you, but I can respect what you have to say, dissent from your opinion without fear of a "You're stupid, I know all" response....ahh real discussion...


And I apologize for this broken, semi-rant :P

Blogs Created:
5 blogs
Most Commented blog:
A site of discussion; no name calling?Thank you GB and community!
Total Comments on blogs:
136 comments