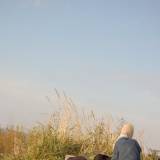 Pappa Vinny couldn't stick around and shepherd us through life forever now, could he?

All three of these gentlemen have been a source of positivity for me for the last decade+, which is basically for most of my adult life. To not have their voices together will a really shocking sensation, I'm sure. I'm not sure how else to put it other than these guys felt like really awesome older cousins that we always saw the best of.

@vinny, your relentless positivity combined with your work ethic and your curiosity have always been an inspiration to me. Thank you for being a public figure for so long, through so many chapters of your life (and mine, as well). Now, with a son of my own (and a daughter on the way), I've even taken cues from some of the parenting things you've talked about on places like the beastcast. It's been really helpful, especially in the last few years, to not feel alone in the experience of bringing up a child as a parent who loves games...I don't have any friends who really play games at all, much less that are also parents. My wife doesn't know anything about Giant Bomb, but you are basically a household name because I pretty consistently have to explain what I'm laughing at, and it usually involves you. Thank you for all of these chronicled years at Giant Bomb, and I selfishly hope that you continue on in something that's public.

@alex, it's been really cool to watch your transitions throughout the years, from gamespot to screened, to giant bomb, and finally to GBeast, where, to me, you really seemed at home. You have always been such a good balance for the crew, keeping things level and being a voice of reason when things were bound to go off the rails. Your drum streams actually got me to start practicing again, and when you got your new kit that ended up being the same as mine, I took that as a sign. Thanks for everything and I hope that None Above All continues to do well! However, the cliffhanger of your Def Jam Fight for NY playthrough is killing me.

@brad, who knew that you would be such an awesome host on the bombcast? Thanks for taking that on, it's been great. It's also been great to see your "shtick" go from being "dying immediately in quick looks" and getting made fun of years ago to taking some of the most ruthless challenges head on in "Breaking Brad". You were a defining element of this crazy, novel, beautiful mess of a site and I'm glad that you'll be able to take that with you to your next endeavor, and I'm very excited to know what that is.

My sincere thanks to all three of you for all of these years you've given to this site and community.

As for memories, the first and most evocative one that comes to mind is probably @vinny running over that first car in the Euro Truck Simulator with Drew barely being able to getting out the words "...there's a car...." between laughs. It's one of the funniest memories I have from this site. The entirety of #fmvinny is a well of joy I can keep coming back to, which I guess is true of all of the awesome moments these guys have given, so there's some consolation in this.

Sent FEAR over to you, sorry, didn't see your wall post :(

@glasswall52: i'll request Mirror's Edge if it hasn't been taken yet.

Do you have a Fez key still? I'd love to finally get the chance to play that. Thank you!

I would appreciate spec ops: the line!

To pay it forward, I also have the following to give if someone wants:

Holy crap, I don't even need it....because I already have it. I'm an idiot.

How's about Shank 2, and if no one wants it, Lifeless Planet.

When editing a wiki page and scrolling down so that the "sticky" toolbar is activated, any use of search fields (site search for images, links) causes the toolbar to disappear. It will reappear when scrolling the page slightly.