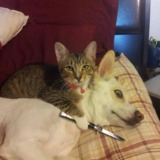 When I saw the news, my heart sank. I was shocked. I Immediately tried to believe it was a horrible, way overdue April Fools prank someone at Giant Bomb was trying to orchestrate. And then I settled down, started at the title alone for 5 more seconds, and accepted the saddening fact: Ryan Davis passes away at 34 years of age.

I haven't been frequenting to Giant Bomb since 2013 started; Nursing school just took over my life from then on, and didn't have nearly as much free time as I had years before. Still, I do try to find just enough to catch up with a Bombcast or Quick Look. It just sucks that once I finally do get my life together and regularly lurk the Giant Bomb forums and watch Quick Looks again, I will always have the thought in the back of my mind that Ryan will no longer be there. The days imagining of me finally attending my first GB PAX panel and getting to talk to Ryan and the rest of the crew will forever be altered.

It's weird. It's surreal. Not just for that hard fact, but because I feel this way for someone I've never even met in person, let alone interacted with once or twice. But the kind of personality Ryan brings to the table is something else; you're just drawn to him, whether he's providing the community with lots of opportunities to photoshop his face in every image possible or when he's providing his wisdom about the state of the gaming industry. It's not easy to achieve that. He was blatantly honest and was very unforgiving about his opinions. That's a trait that, love it or hate it, you had to respect it. He wasn't kind nor was he an asshole; he just wasn't afraid to be himself. He had that laugh that was just as infectious as that of Vinny Caravella's. And I laughed along with him.

I can't really say Ryan has influenced me in a big way, but I'd be lying if I said he didn't...in some form or another. His deadpan-style delivery of jokes and whatnot, his style of writing, and I've since had the habit of saying "Goddamnit" in totally appropriate situations. Before Alex Navarro became my #1 favorite writer in the site, it was Ryan Davis. Out of all the staff, Ryan's reviews were the most enjoyable to read, and the ones that 'clicked' most with me. It was because of the way he wrote his reviews that gave me some motivation to keep writing my own and improve at it little by little. I just wish he could've written more.

Tears won't be shed. Not because I'm a heartless bastard or anything, but I don't think Ryan would want me mourning for him; he'd probably want us to be happy, move on, and keep supporting the site he has always supported himself with all his heart. And I will keep doing so.

At this point, I've exhausted everything I've said about the man. There are so many favorite Ryan Davis moments I want to say, but I'm sure everyone has said it at least once already. So in brief, I'll close it out with: Thanks for the laughs and the all-around awesome personality, Mr. Davis. This average, broke, still-living-with-his-parents Nursing student/duder will surely miss ya. We all will.

No seriously, to everyone at Giantbomb (and to my 69 followers...or friends, hell I can't fucking tell anymore), I just wanted to say Happy New Years. Yet another fun year watching the Giantbomb crew do their thing, listening to their heated game of the year deliberations, and everything else in between. I'm also definitely looking forward to the many surprises in store for us in 2011. More WUTANG, perhaps? Another Endurance Run? More awesome guests? Why not? I hope to see more cool things in both the staff and community in the coming year. You guys and gals are great. See ya'll in 2011, and stay awesome.

Okay, I lied. There you go. Boom. Done. But it's not like I'm making this blog just for the sake of attempting to get that particular quest done. I guess I'll talk about random stuff besides Giantbomb questing, and just wonder why I'm even writing this much even though I know nobody's even going to read it. Ah, whatever.

I like quests. Do you like quests? I sure do. Well, I'm kinda enjoying the quests, but I can't seem to figure out some of them. It's probably because of my ignorance, but some of the quest clues I've run into so far have been vague. Also, I think some of the features on the site are bugged. I have a few lists created on the site already, but it doesn't register or indicate that I created one. Any of you running into the same problem? Or maybe there's something I'm missing and we're supposed to create a specific kind of list?

I've earned quite a bit of money recently. I'm thinking of buying that one Foo Fighters Greatest Hits album, but at the same time I want to save that money on buying a PS3. What should I do, I'm confused. Oh yeah, my birthday's coming up pretty soon. Hopefully a generous relative will give me some cash to spend on that. Once I get my own I guess I'll get Final Fantasy XIII and Resonance of Fate. Red Dead Redemption sounds pretty rad, so I might get that in the future.

So how about that Deadly Premonition Endurance Run, eh? Tbh, I hated the first episodes, and I'm really starting to warm up to it. I don't know if it's because of how terrible almost everything about the game is, or from the seemingly mildly insane, to the absolute hysterical characters that inhabit the game's world. I've been speculating about who the fuck Zach is, and thinking about how there might be some symbolic meaning to why the zombies are doing the limbo. I could be totally wrong though.

So yeah, I guess I've talked about everything I felt like talking about. I don't usually blog anymore, mainly because I really have nothing interesting to talk about. But here you go, I actually did.

The title says it all. Enjoy.


Got this from their blogsite. PlatinumGames hired a dancer to do the motion capture for this scene, and apparently, you will get a chance see this dance sequence at some point in the game. When that will happen is beyond me. I don't know about you, but this game just got sillier. Or wait--it already is.
37 Comments