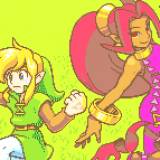 Attorneys, and Easter Eggs, and References, oh my!

So I bought Apollo Justice recently, and it is fun. I'll get more in-depth later, but something happened that just made me laugh. 3rd case, right near the beginning. Here it is, word for word:

(After examining a poster on the wall)

Apollo: What's a police recruitment poster doing here?
Apollo: "Rock on... with the police."
Trucy: Maybe they're trying to trick kids into thinking the police are some kind of band.
Apollo: But that's just silly. Who'd name a band the "police"?

Yeah... you probably saw it. Next, another reference to The Police (I'll underline the reference)

(After examining a light on the ceiling)

Apollo: This place is decorated like a high-school dance.
Apollo: Though I think our decorations were paper, not... chains.
Trucy: The Gavinners are into chains. It's part of their image.
Apollo: Huh, no kidding.
Trucy: Ever since they used chains on the cover art for "Gunna Lock U Up".
Apollo: They're really into the whole police thing, aren't they.
Trucy: It would be cooler if they turned that red light on.
Apollo: ...They don't have to turn on the red light.

If you don't recognize it, look for the lyrics to the song "Roxanne" by The Police.

Well, that about does it for me, for now at least. Good day.

NOTE: Anything on my blog here will also be on my GS blog, so check either one.

Blogs Created:
4 blogs
Most Commented blog:
It is me
Total Comments on blogs:
30 comments