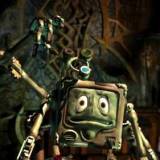 It's odd to suggest that a racing game is relaxing, but Test Drive Unlimited 2 continues the original game's concept of being more of laid back cruising game than an actual racer, where you drive exotic cars leisurely around tropical locations. There are races, certainly, but they're not really the game's main draw and you'll likely spend more time exploring the islands in the game than racing against the AI.And the game is better for that, as the races themselves are either frustratingly hard ...

Yup, it's a train simulator 0

Railworks is much more simulation than game, and to say that it's very much a PC game isn't really a stretch either. Its core 'gameplay' is extremely hardcore, not particularly accessible to newcomers, and the interface and menus do little to help this either.In the game, you drive trains. This is sort of obvious, but the various career missions and scenarios (the difference between these other than granting achievements I'll never know) have you driving routes to pick up passengers, shuffling ...

Nier is one of the most inconsistent games I've ever played. It has a handful of good qualities and some design decisions so baffling that it's incredible the game was allowed to proceed to certification. It's technically a JRPG, but calling that is an awful stretch as it plays out much more like a God of War clone with fetch quests. And courier quests. I guess it has a fishing minigame, which is something that all JRPGs have too, but still. The story pits you as Nier, out to find a cure for hi...

Costume Quest is one of those games that gives a good first impression. It has a nicely defined, clean art style, reminiscient of Animal Crossing or Earthbound, a whimsical sense of humour and simple game mechanics. The main thrusts of the game are mild adventure style item hunts and RPG battling. In order to proceed further and rescue your sibling from the clutches of the monsters hell-bent on stealing candy from your town, you need to acquire new costumes. Many of them have abilities that can...

This fall marks the first time where we are truly swamped with full-band plastic instrument games. Each of them, ideally, should bring something unique to the table to distinguish themselves from one another. Rock Band has its hook via DLC, and copious and regular amounts of it. Guitar Hero: World Tour has a grab bag of me-too and legitimately unique features like the music creator. And Rock Revolution distinguishes itself from the other two games by sucking, hard. First off, there is no denyi...

The original Sin was good, uncomplicated, violent and cheesy fun. It was also unfortunate enough to hit shelves at the same time as Half-Life, which, well, ended up being one of the most pivotal games in years. Needless to say, Sin got a bit lost in the shuffle - almost undeservedly so, as the game was a lot of fun to play even if it was a bit straightforward. Emergence is a sequel of sorts offered up in episodic gaming form - like Half-Life 2's piecemeal chapters, Emergence is the first segmen...

Prince of Persia with rock-throwing and fantasy 2

Dark Castle is a 1986 Mac classic that blends excellent gameplay with revolutionary production values (for the time). It was developed for the Mac by two guys under Silicon Beach Software: artist Mark Pierce and programmer Jonathan Gay. Jonathan would later go on to create Flash (yes, THAT Flash). Dark Castle pits you - Prince Duncan - against the evil Black Knight and his hoards of minions, from bats and rats and vultures to guards, one-eyed mutants (basically a big eyeball with arms and legs)...

Showering your enemy with their own viscera 0

Is it wrong to enjoy raining blood and body parts on the heads of your enemies? Of course, in order to do so you have to land one or two cocktails (or more...nothing wrong with excessive explosions) in their midst and hope the fuse doesn't fail. Then you'll be rewarded with a handful of muffled booms, cries of dismay, and several completely unlucky soldiers bursting at the seams and sending their flesh and entrails spinning high into the air, bouncing down off their comrades' heads, and staining...

Way back in the middle of the SNES days Nintendo introduced the FX chip in a number of its cartridges. As per the usual naming conventions started with the Super Nintendo and putting 'Super' in front of half the game titles and later continued with the Nintendo 64 and putting '64' after half the game titles, FX games were denoted with the FX. Star Fox FX was the first of its kind, sporting flat-shaded polygonal graphics roughly on par with what Sega's 32X would later produce. They certainly were...

Arguably the best RPG of all-time 3

The two main RPG styles are rarely broken - Japanese RPGs love their part fantasy part sci-fi settings with tween characters and Western ones are quite content with their monogomous relationship with Dungeons &amp; Dragons. Occasionally you get a game that tiptoes out of such a description, but not very often. That in itself is enough reason to take a peek at Planescape: Torment, as while it carries D&amp;D designation it takes that setting (and even style of gameplay) and warps it. With excelle...