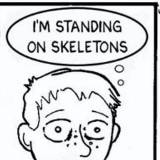 The End of ME3 - Replying to some of the common criticisms

I recently wrapped up Mass Effect and finally had a chance to dive into all of the discussions and debates around the endings. For my two cents, I liked the endings - I didn't love them - but I thought they adequately told the story of my Shepard.

Below, are some of my thoughts on some of the common criticisms I've seen regarding the ending of Mass Effect. I don't necessarily think I'm right or wrong - these are just the things that nagged me when I read common posts arguing against the ending BioWare created.

(I had some links in the article but they didn't transfer over from word - I'll hook them up and credit some of the other writers who did a fantastic job of making similar points about the ending).

**Lots of spoilers ahead**

Player choice was an illusion in Mass Effect

One of the common complaints I see about the ending is that it gave players no choice. The argument is that all of the decisions invested throughout the game played no factor in its conclusion. While, I disagree (and more on that below), I think the first thing we thing we have to establish is this fact – players never had any true choice in Mass Effect to begin with.

For one, regardless of the choices you made along the way, your game wasn’t all that different from mine. Despite all your choices, we all did the following:

• Fought the Reaper at the Citadel

• Were killed in the surprise attack

• Were recruited by the Illusive Man

• Made the final assault

While you were given plenty of choices in how certain threads of the story played out, nothing you “choose” altered the main construction of the narrative – we all experienced the same beats in the story BioWare wanted to tell. Think of the main story as a self-contained jar, even though you were given plenty of options inside of it, none of those options existed outside of, or conflicted with, what BioWare intended.

Thus, you never really had the freedom to solve the galaxy’s problems in your own unique way. If anything, most decisions came down to a binary choice – do I do this the good way or the bad way? Or failing that – your decisions came down to did you or didn’t you perform an action, such as a side-quest, fetch-quest or loyalty mission.

It’s a marvel of BioWare’s system and story-telling powers that each of us feels uniquely connected to our Shepard, but it doesn’t belie the fact that even though we all made plenty of decisions, they were never our own – every choice we made in Mass Effect was one BioWare created for us to choose – and ultimately they always served the over-arching narrative.

One of the other common criticisms is regarding the similarity of the endings – a common argument being that the end is really just “the colour of the beam” coming out of the Citadel. First things first – that point is not entirely true. While, the finale boils down to three choices – there’s already a lot of variety in them.

Take a look at the variations that can occur even within the three colours. There are some pretty big implications in them:

• Earth is completely destroyed or saved

• The Reapers are destroyed or they survive

And even within these core choices, there are smaller variations like the level of destruction on earth, why the reapers leave etc. For my two cents, there’s a pretty big difference between my character living or dying at the end, or whether the earth is saved or not (since that was the main crux of the story, you know, saving the planet and defeating the reapers (who you don’t even technically have to defeat given your choices).

And before we get to that – let’s rewind to the three choices presented by the Catalyst: destroy, control or synthesis. Depending on your play-through, not all of these options might have even been available.

And while I’ll give critics the benefit of the doubt that we don’t really see the implications of our final choice, it’s not as though it’s not explained. For my part, the Catalyst provides a pretty intricate description of exactly what is going to happen depending on which path you walk towards. Sure, BioWare could’ve added a longer sequence of cutscenes to demonstrate what the Catalyst was talking about – but let’s be real – it wasn’t necessary to understand the ending. For my part, I’d rather be told what’s going to happen and then imagine the consequences for myself than be hit over the head with overt exposition.

From there, I ask you to rewind further – did the Illusive Man kill himself or did you do it? Did you shoot the Illusive Man before he killed Anderson? The decisions you make provide a decidedly different experience to how Shepard and the Illusive Man, and Shepard and Anderson’s narrative arc concludes. And speaking of conclusions– the last 20 minutes of Mass Effect 3 is not effectively the end of the game – the game itself is the end.

As others have pointed out, the entire game is a sequence of end points to plot threads, both major and minor, that have weaved through the three games. Take for example how you handled the Genophage or how you handled the balance between the Geth and Quarians – or perhaps how your cycle viewed the Protheans or how you dealt with the aforementioned Illusive Man. Then consider all the smaller points – all the characters’ stories (if you even still had them alive) such as Wrex, Miranda, Jacob, Ashley (in my case), Mordin, Samara, Thane that were brought to a conclusion. And I’m not even getting started on the smaller NPC character stories that have weaved through the three games.

The point to all of this is simple – the end of Mass Effect 3 lies not in a single cutscene – it exists in all of these choices above. What the criticism fails to see is the big picture – that while the main story arc might have tapered to some particular conclusions – how you got there, from the first Mass Effect to the last is entirely unique. I guarantee you – with all of the variations above – the Mass Effect 3 that the critics played wasn’t the same as mine.

The shaky ground of debating "facts" in a fictional universe

The last common criticism I see about the ending is regarding the plausibility of its fiction – this one is the oddest for me to comprehend at face value.

First, the burning thing I want to point out is a common misconception about the Catalyst and Reaper’s conveyed intentions.

Some critics have argued that “the synthetic reapers destroying all life in order to prevent synthetics from destroying all life” seems silly – and it is. But it’s also not what they are doing. The Catalyst notes that the Reapers harvest all evolved life every 50,000 years – incorporating the genetic data of those races into the Reapers – and while perverse – this is their way of cataloguing this data so that it’s not destroyed. The Catalyst notes (and Javik also notes on Thessia) that the Reapers don’t harvest non-advanced civilizations – they leave them be.

So, every 50,000 years advanced civilizations are threshed out (hence the reaper metaphor) and un-advanced civilizations can bloom – and the cycle starts anew again. The reason for this, the Catalyst states, is because advanced civilizations eventually create synthetic life that destroys everything (for example, the Geth) – thus no DNA is spared. While their solution is brutal – the logic is that restarting the galaxy is the only way to save the DNA and stop a cycle that would end everything permanently (rather than cyclically).

But here’s the real trouble with everything I’ve said about the facts above. They are all made up. It’s all fiction. Everything in Mass Effect is predicated on made up things. That’s the main trouble I have with this debate – it’s like debating the molecular make up of ghosts, or the hunting preferences of vampires. None of it is actually based on anything concrete.

To be clear – there’s no such thing as Turians, Quarians, biotics, mass effect relays, reapers, future London etc. The reason we invest so much into it, like any good sci-fi is based on a healthy dose of suspended disbelief.

And while, I understand if some people approach the ending from the perspective that their suspended disbelief wasn’t held up - I think that’s an awful slippery slope. It’s one thing to argue that you didn’t buy the storytelling logic presented at the end – but it’s another to get into specific debates about the lore of mass effect and how it functions.

Off the top of my head, the debates I’ve seen raging include how the mass effect relays work (i.e., that “science” dictates that wrecking them kills everything because that’s what happens when Shepard sends that asteroid into a previous relay), reaper dialogue contradictions throughout the three games, the indoctrination theory (for my part, this is just extraordinarily wishful thinking), and Joker’s motivations/actions/timeline at the end.

My point is that it’s all made up and those looking for holes are going to find them no matter what. Mass Effect is full of unexplained inconsistencies and it’s fruitless to point out breakdowns in logic – the entire game is built on defying actual logic.

For example: Why does shooting and using biotics not punch holes in the sides of ships when you are fighting on them, how come when I use singularity near my teammates it doesn’t make them go flying too? How come you found the Illusive Man so quickly in three but couldn’t find him in two when you were interacting with him all the time? How come my weapons went from using coolants to using clips from the first to second Mass Effect?

If the “trueness” of Mass Effect’s ending is really bothering you, I’ve got bad news – none of it is true. And while I understand that some people might struggle with how the story pans out, the focus on "facts" is misplaced because when you take a microscope to the universe, the lore and the story, you;ll realize all of it is predicated on a consistent untruth.

Blogs Created:
1 blog
Most Commented blog:
The End of ME3 - Replying to some of the common criticisms
Total Comments on blogs:
22 comments