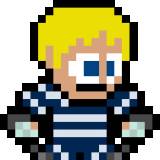 My Christmas lineup- or, more importantly, what's NOT in it.

So, as a fifteen year old kid, there comes that time of year every December when the games you're asking for for Christmas must be decided on. With receiving Halo 3 last year, the doors were FINALLY busted wide open for playing M-rated games. It used to be quite a bummer when the new "b est game" would come out every year and be M-rated, making it off limits to me. But NOT THIS YEAR, BUDDY. Now, the full spectrum of games is out there waitin for me. So, with that in mind, I thought I'd share what I'm gonna be playin come January, and what I won't be playing. I hope you take upon yourself to:

So while I'm playing those in the midst of the cold, snowy winter, here are the games I will NOT be playing.
Aaaaanyway, those are the games I am and am not getting for christmas. Feel free to convince me otherwise on any aspect of this list, or suggest something to add. And also? FIRST. BLOG.
2 Comments