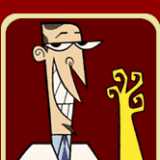 I drew a penis, it made a monster

I just got my hands on a (very hard to find!) copy of Monster Rancher DS. I've always been a fan of the series, what little of played of it since I only got started with my Monster Ranch-ing on the Gameboy Advance (not having a PlayStation until I got my 60GB PS3 just two years ago will do that to you), and well, there's something just so damn charming about the series. Being able to spawn these, uh, Spawn using unconventional means, then raising them as you go gallivanting through various tournaments and distant lands.  There are some elements I know will not appeal to a lot of people, but I can tell you that there are more potential fans of the series then the dead boards here seem to let on.

It's a deceptively simple game and worth checking out if you're curious or a fan.

And let there be e-peen and quests!

This blog is simply me having a giant hard-on for my new 5850 and, well, to get that damn quest done.

Hello there.
Well, I've done it, I found an idea that I believe I'd like to make a game based on. The idea is so far just that, an idea, but before I start brain storming like mad and make it any further into relearning C#, I need your thoughts on it all.
The basic plan so far is an RTS mix of a Black & White/Majesty game world where you don't really affect your units directly, but rather you suggest where the people's priorities should be. Your village ("base") would consist of simulated villagers that have their needs, food, shelter, ect. that you could specialize by giving individuals specific items, or a combination of items. Now what I need your suggestions with is with this resource system; what combinations should equal what?  Keep in mind I want these items to stay in the confines of a stone age premise.

Note: As I go through with the idea I may add or remove resources I'm thinking of using.

The bare resources to choose from would be:

To give you an idea of what I mean, think of it like this: I collected a stick, and two big rocks. I use both big rocks together to make a sharpened big rock. Then, using the sharpened big rock, and the stick, I get an axe. This axe is handy not only as a weapon, but it's great to chop down trees to get logs.

Also, don't think with just weapons; you will also need fire. Collect two twigs and use them together to get a small blaze going. Feed the fire sticks and it grows, but it won't last forever. From there, add logs and you have a fire that will be prime for cooking meat for a good long while.

Thank you for any input.

August 8th, 2010 - I hate to say it, but this idea has been scrapped and I have since moved on to other projects (and, before you ask, I am not talking about multiplayer about said projects at this time ;) ). Thank you all who gave me feedback.
21 Comments