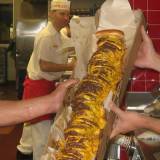 Okay, It's far too late, and I have yoga too early tomorrow, but the world needs to know. I hated. my. old roommate (I didn't mean that period between hated and my, but I just went with it.). he sucked. He always skyped with his damn girlfriend and used his pet name for her (Boo, if you were interested.Is that dumb or what?). I'm not really sure how much I drank, but it was apparently enough to convince me that I needed to say this right now, rather than trying to sleep. anyway, I may recall details, if anyone actually cares to hear them. or I'll delete this. We'll see. Yoga.