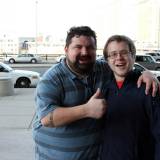 Thanks Google. Knew this kind of stuff was coming, but I had no idea it would be so instantaneous and automated like this. I don't even see how a service that is specifically created for streaming games full of copyrighted music is going to survive with this. Especially once it inevitably starts affecting live-streams.

My favorite moment had to be, well, meeting him. He was sitting outside at PAX 2011 smoking a cig. I was with my friend at the time who was new to Giant Bomb but had quickly became a huge fan. I saw him, and told my friend, "We should really go say hi!". My buddy was a bit nervous. I mean it was understandable, at this point he was a fairly big deal now and he probably got fans talking to him all the time. Not to mention he had to have been busy, he was at PAX running a website after all. But I know people, and I just knew it wouldn't hurt. I could tell what kind of guy he was just from looking at him, and of course from following GB since it's beginnings.

I told my friend, "Look, we'll just go say hey and tell him thank you for his work. I don't think that's a big deal". That's all I wanted to do and that's all I expected. That is not what we got. When I came up to him and said something like, "Hey Ryan! I'm sure you get it a lot, but we just want you to know that we absolutely love what you've done with Giant Bomb", and prepared to walk away, he put his cigarette out, put his phone away, stood up and shook our hands, and proceeded to pretty much say "Fuck that, we're talkin". I had a great conversation with him. About the site. About his ideals. About what he hopes he's accomplishing. And most importantly, about fun and video games. The conversation didn't stop until my friend called me aside for something. I thought I was right about him. I was wrong. I thought he was a great free-loving dude. I didn't realize how much of just an excellent person he was on top of that, one that unflinchingly stood for his values.

This picture was taken that day after around 5 minutes of talk. You just don't get smiles that real and that quick with normal people. Nah, Ryan wasn't normal. Ryan was Ryan. And he was a friend the instant I met him. I know he's still finding the humor in every single fucking thing, wherever he is. Miss you, friend. And thanks.

He was a friend the moment I met him. You just don't get smiles that real within 5 minutes of chit-chat with anyone else. I know he's still finding the funny in absolutely every single fucking thing, wherever he is. Miss you, friend. And thanks.

I had the pleasure of meeting him at PAX 2011, and the picture I got with him, which is my profile picture here, speaks for it all. Within seconds, I felt like he was just a good friend of mine. He ended up talking to me far longer than he probably should've, I know he had to have been busy. But no one was dragging it out, we were just both enjoying each other's company. So natural, genuine and truly wonderful to talk to.

And all of this was just magnified once he got some drinks in him at the after party. My night ended with him, my friend, and I, outside of the bar casually smoking and shootin shit like we'd known each other for ever.

The world has lost a genuine smile, and a truly proud figurehead in gaming. Thanks for everything Ryan.

I had the pleasure of meeting him at PAX 2011, and the picture I got with him, which is my profile picture here, speaks for it all. Within seconds, I felt like he was just a good friend of mine. He ended up talking to me far longer than he probably should've, I know he had to have been busy. But no one was dragging it out, we were just both enjoying each other's company. So natural, genuine and truly wonderful to talk to.

And all of this was just magnified once he got some drinks in him at the after party. My night ended with him, my friend, and I, outside of the bar casually smoking and shootin shit like we'd known each other for ever.

The world has lost a genuine smile, and a truly proud figurehead in gaming. Thanks for everything Ryan.

This really didn't go in the direction I thought it would. I really, really, like the Last of Us. And I think the gameplay in it is good as well. I haven't responded for so long because I've been playing it actually.

Oh well, guess it's kind of my fault. Probably should've thought a bit more before posting this. But basically I guess the just of it was this game does have faults, and I'm just not fond of the way shiny things can make certain reviewers with (I think) a certain amount of responsibility completely forget about those. I'm not trying to say it doesn't deserve the praise it's gotten, or even that there's enough problems to bring it down from it's highs, but there are certain things that most have just glossed over in all the worship.

It's not just glitches. For instance, I have picked up and moved a lot of planks and ladders. And wooden slabs in water.

But just never mind this. At this point most of you guys just think I don't like the game. Sorry if I gave off that impression, that's not what I intended. But right now, I'm enjoying the game too much keep going with this conversation that I didn't mean to start. Cool comments and such guys, but I think I'm gonna close this now.

EDIT: If I can figure out how to close it at least....oh well back to the game.

@loktarogar: That's not exactly what I meant about gameplay and immersion not being possible together. Honestly, I kind of just typed this on a whim and pasted it here. So I could've been more clear about things.

I'm saying when a game's main purpose is immersion, and does it very well, but it's gameplay hinders that in any noticeable way, it should still but judged accordingly. I don't necessarily think that gameplay should be over all, especially considering everyone's opinion on gameplay can differ wildly among many other things, but whatever gameplay the game decides to incorporate, it should be considered from just as many angles.

It's hard to incorporate gameplay and strong immersion well really, so again that's why I really didn't want this to come off as an attack on The Last of Us. The game that Naughty Dog has made really is something special, and I'm enjoying it a lot.

And of course I don't mean that I literally forget that I'm playing a game. When this game uses all this awesome atmosphere to really get me into it, but then Ellie goes through me and a bad guy while kind of poking her knife in the air for the animation to stab the bad dude in the back, it's just kind of especially harming to a game like this.

@theht: Yes. That's pretty much what I'm saying. Or at least just as much so, but I myself prefer more so. And @oldirtybearon: clarified it more. Games should be judged on gameplay, and what they set out to achieve. If the game's gameplay impedes at all on what the game attempts to achieve, it should be judged just as actively, no matter how pretty it may look while it works.

I still stand by that this is against journalism though. I really love The Last of Us, but I just don't think it's right that it's flaws go almost completely unnoticed by most of the gaming media.

It really is a bummer. I had seen Alien a long time ago, but the fear of facehuggers (lol) actually put me off from seeing Aliens when I was younger for sometime. I watched Aliens for the first time just a couple of days before this game came out, and absolutely loved it. Not only that, but it was still very fresh in my mind, so I was so excited for a game to truly capture that atmosphere and run with it.

I can't even imagine how the long time Aliens fans feel, because my disappointment alone was really rough. And seeing that demo footage compared to the final version just makes it almost seriously depressing. The game I, and many others, wanted to play was shown to us, but not given to us. Like seriously look at some of that demo footage, it looks beautiful.

Luckily I had seen the reviews hit and resisted paying full price for it, so I rented it. The multiplayer is actually....kind of fun, and a bit more balanced than I expected. If the game was around 20-30 bucks I'd pick it up just for that. But the single player is hot, HOT garbage.

I never held anything against Gearbox for DNF. People that thought that game was actually going to be a new great shooter I thought were crazy. I always felt like Gearbox were just the people bringing whatever DNF was to a freaking shelf finally so people could play it, and honestly I didn't expect much from the game, I just wanted to see it, and I was satisfied.

This on the other hand, this is just kind of straight up messed up.

It's really sad to realize THQ is actually gone. I too thought something was going to save them. They've been one of my favorite developers of late, and they really put their heart and soul into many of their games. Of course, there were many games from them that didn't have quite as much effort, but still.

Even after the auction and everything, I still for some reason felt like there was a shred of THQ left. This article was great in showing me the reality of the situation, and where it might lead.

Excellent stuff Alex. So far this new feature for you has been great.