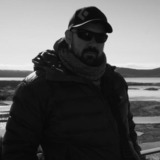 I missed something, what sale is she referring to?

Ok I'm going to hijack my own thread and update this thing with some of the stories I experience during my play.

Yesterday I was trying to score some loot from some island, and I was being hunted by two galleys, big ol' 4-man ships with wayyy more firepower than my little solo Sloop could muster. So I blacked out my ship and snuck into a small cove, trying to lay low. Luckily while I did this a storm hit, which makes it super hard to navigate and maneuver, especially with larger ships. I dropped anchor and counted myself really lucky.

So I started to loot. While I was retrieving some treasure I spotted one of them trying to sneak onto my ship. However in the spirit of speed I had been running by a lot of skeletons who were spawning in to protect the treasure, who managed to hit him a few times before he even got on board. So after dispatching him handily I continued to loot the island.

By the time the storm cleared I was already on my way back to cash in my haul, all while watching the two galleys blasting each other in the background.

Great day to be a pirate.

Is there any interest in SoT within the community? I picked it up for the first time this week and am genuinely loving it. Lots of content right now, and it's fun to get into as a new player.

Hey folks! I'm back from Army orders for a few months and running Dog Bottom ( PC) again. If you are looking to get into Destiny 2 on the PC, we have space! Hit me up on Bungie net @EggshellSkull or Bnet at Hitman#1875. Have a great day!

@hestilllives19: Done, open to all duders. Appreciate it man!

@hestilllives19: Created a PC clan for US Mountain Time (MST) in anticipation that our existing ones will get swarmed on launch: Dog Bottom. Thanks for the hard work!

Your teacher has violated his ethical responsibility as an educator, and has also likely engaged in criminal malfeasance. Report his sorry ass.

Regarding bullet spongy enemies, I don't have any idea what people are talking about. Most mobs go down in a few burst of an assault rifle, and bosses are really the only mobs that take more than one magazine to kill. If you are having trouble with enemies, it's likely because you are hitting them in limbs and other "non-critical" areas which don't score extra damage. Just aim at the chest and fire a short burst, letting the spread move up to the head. Do not spray and pray or hold down the trigger, you will miss more often than not and enemies will take far longer to kill.