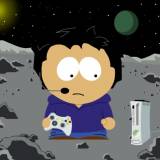 ...and it's not bloody working.

This is my blog... blah blah blah, you've heard this crap before.

Today is a truely monutentous occasion, for I have FINALLY, after two long years, achieved over a thousand wiki points! 1176 to be exact! Kind of a weird, seeing as I only had 460 this time yesterday. That means that I got nearly twice as many points in the last 24 hours as I had gotten in the previous 24 months,  which is kind of desturbing to be honest. Say what you want about the quest system, but I guess it really does work.

Anyway, thanks a bunch Slash! I couldn't have done it without you.

This is my blog. There are many like it but this one is mine. That is all.

I used to be a total Lumines junkie back in the day, but about a year ago my habit tapered off in a big way. I bought Lumines Live and the "Rockin' Holiday" skins when they got a price drop in an attempt to get back into it, but I only ended up playing them a couple of times, mainly because I was unsatisfied with the Xbox 360's D pad. Last week, however, while waiting for a friend to get online I decided to play Lumines Live for a few minutes to satiate my bordom, but instead ended up falling back into it in a big way.  By the time I realised that the "few minutes" had turned into over two hours, I had relapsed, big time. I haven't gone a day without playing it since then, and I've even started carying my dusty old PSP with me again, just in case I get the chance to start a game while I'm out. Sure, I haven't played it on the Xbox since then either, but I guess Lumines Live finaly served it's perpose. I'm hooked all over again.

Hello friends and welcome to the very first edition of my blog. First off I'd like to mention to anyone who reads this (all zero of you) that as someone who is not terribly experienced with this whole "blogging" thing I'm probably not not going to be updating this too often, if at all.

I'm a British college law student, an enthusiastic (although not particularly good) guitarist and a lifelong gamer. I also have a rather strong aversion to most "social" networking stuff, so don't expect to see me describing in great detail how I feel about every little thing, or what I had for breakfast this morning. Basically I'm bored right now and my brother's playing my copy of Saint's Row 2. Usually when I'm bored I post quotes and weird little facts about Jeff, Ryan, Rich and other ex GS-ers that I picked up from the years of listening to them on the "old" podcast in a hopeless ploy to earn points, but I can't think of any at the moment so I'm doing this. Anyway, enough about me. ON TO BUSSINESS!!!

I've been playing a whole hell of a lot of Saint's Row 2 since I got it on Friday, and so far I'm enjoying it. I was really surprised by how much I enjoyed the original Saint's Row back in '06, especially as someone who dosen't care much for the GTA series. I think It was a combination of the more involved, shooter-like combat, the arcadey driving and the far more lenient checkpoint system that initially sold me, not to mention the absolutely ludicrous, unbelievable, and yet somehow still wicked-awesome fake gangsta dialogue and storylines. I'm probably even more surprised, however, that I'm enjoying Saint's Row 2 far more than I did the original, thanks largely to the new co-op mode.

I just want to say that I still don't exactly expect any gaming publications (including this one) to see SR2 as game of the year material. It still suffers from a number of technical issues, most anoyingly it seems to lock up a lot more than the previous game. During the course of a co-op session yesterday it froze a total of three times, twice for me, once for my buddy, with both of mine happening within about three minutes. Not to mention that the homie A.I. is horrible, the police try to murder you if they see you knock over a trash can and the physics are just plain wrong. But at the end of the day, I just don't care. I seriously love that damn game.

I'm also not entirely sure why it's so fun. I guess that part of it is that I've spent almost all of my time with the game in co-op, and sharing every bit of SR2's crazyness with a good friend (thanks Marcus!) just makes it that much better than the original. One particularly awesome incedent occurred when I realized that you could run around the city naked, and then preceded to jump on top of a car and shout to my friend, "look at me, I'm urban surfing!", which to my surprise actually initiated an urban surfing minigame! Now while that certainly would have been amusing had it happened in single player, it was downright hilarious in co-op. Other little things, like me apparently earning an achievement for singing along to the radio, (presumebly when "The Final Countdown" was playing) just add a huge amount of charm to SR2 that most other games seem to lack.

Anyway, enough about Saint's Row, this isn't a review after all. It's late and as you can probably tell by the spelling errors I'm pretty tired, so I'm signing off for now. Laters.