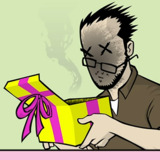 It also seems to me that, as with other things that carry this aspect ratio, you're best looking at it as a case of being able to see more to the sides than the top and bottom being carved off.

Except that's patently untrue because this is a VIDEO GAME. Black bars in film is because there's no way to fill in those black bars with more information, you're seeing literally what they filmed.

In video games, they can just render where the black bars would be, there's no excuse to ever have them there aside from performance or bullshit "artistic intent."

This is 100% proven by the fact that when you use Flawless Widescreen... You see just as much on the sides AND more on the top and bottom. It fills the entire frame and you get more useful information.

Also, I don't accept the FoV argument, the FoV is so zoomed in it's uncomfortable and nausea-inducing even for a lot of people not normally affected by it. The black bars only add to that sensation. It's unpleasant, and not in a way that enhances the experience. Also, since it's not a horror game in even the vaguest sense of the word, the entire argument about it adding to scaring you is total fucking nonsense.

I agree with all of this. Even if I didn't agree, it's a matter of fact that can't be denied.

Thanks for the hard work and harder laughs mate.

I can change the title fine, but when I swap #3 and #2 around it gives the saving popup, says list completed at the top and then loads this page!

When I return to the list, no changes have been saved. I've edited other lists since the site launch with no issues (except it still says I have 14 unread messages when I really don't).

The issue has since resolved itself.

Thanks mate. I've listened to all your gaming podcasts and all your Adam Corolla collections as well. Thanks heaps for your hard work mashing it all up.

I've tried downloading large files (~1GB) in the past few days but they've dropped out at around the 80% mark.

I use a download manager and it makes four connections at once to download it. Does this cause the issue?

I'm in Australia and stuff takes ages to download because I download at 160kb/sec. Does this cause the issue?

I can't figure out the first two from You Had Me At Hello... unless it's bugged out.

I would REALLY like to be able to change my username, but I'm too invested in this account to sign up again. I would pay for that alone.

I don't know if this has been clarified, but for the subscription, would we be subscribing to an individual site or for Whiskey?

I've got a bad feeling about Fable III. It seems to lack improvements from Fable II, the most important being the constant slowdown.