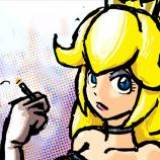 Ahh, and so a summer of games truly commences. I ordered my Playstation 3 (Slim 160GB) from amazon a few weeks ago and after a few troublesome deliverymen it arrived. It had been too long in the making, always putting it off because it was too dear.. or there where just not enough exclusives. I couldn't feed myself these lies any longer, the price is now £200 for a new slim model, i'm cool with that! With the release of Infamous 2 and my E3 hype over Uncharted 3 there was definately enough reasons in my mind to just go for it. So I piled together birthday money and the rest of my student loan and did exactly that.

With it I picked up the following games (at least to start):

I am yet to get PSN credit or enough money in my bank to actually buy anything by that means to purchase some of the PSN goodies that I look forward to.. such as Flower. Nevertheless that is probably a good thing considering I'm in grave danger of starting everything and completing nothing. If anyone has any opinions on some of the more obscure PS3 exclusives such as Valkyria Chronicles then I'd love to hear it.

Originally I had been a proud owner of a PS2 and hadn't even went near the Xbox basically. With the release price of the PS3 however I was priced out and eventually went for an Xbox 360. So I was looking forward to my reunion with my good old pal Dualshock. It felt strange, weird, a little awkward... but nice. I'm slowly but surely getting used to it once again, it's lighter but it takes quite a bit less time for your hands to hurt a little. I find myself taking a small break more frequently because I feel my hands need it. The fact that the battery is inside it is quite a pain, but it's not too bad for myself considering the setup I have. On a controller note, having just played some Killzone 2 and Uncharted I find the implementation of the motion sensing to be annoying. In uncharted the angle of the controller depends how far you through the grenades, it's incredibly awkward. With killzone there is stupid rotation 'minigames' almost for doing stuff like opening some doors and planting some devices. Both feel awkward and there are no alternatives for either. I'm hoping that most of that stuff was implemented almost to show off the 'potential' and in later iterations the developers have given up on it. At least Naughty Dog removed it from Uncharted 2 which was a happy moment indeed.

All in all first impressions are good, I certainly enjoyed Uncharted 1 a whole lot and look forward to exploring the rest of the content that I have missed over the past few years.

So this is my first blog, ever. Forgive the lack of structure and terrible use of the english language - I study computer science, I'd prefer if I had to write this whole thing in Java. It's been much too long since I've actually written something of length. Anyway, there is only one topic on my mind right now, so let's get that blog ball rolling...

First impressions of Twin Peaks and it's similiarities to Deadly Premonition

After reading an article on gamasutra, with SWERY the creator of cult phenomenom Deadly Premonition I discovered that after showing the game for the first time it had to be substantially changed due to a remarkable similarity to Twin Peaks. Just a few days ago I finished Deadly Premonition and loved the story and comedic style. If that weren't reason enough, I have an abundance of free time and a lack of television shows to watch. Thus I started watching. See now, I was under the impression that Twin Peaks would be a more grounded story, down to earth but with similar concepts and design. The pilot, the length of an a movie nowadays crawled a long at a slow pace. Slowly introducing characters, of which there are a large amount and I'm still getting to grips of who's who. I could instantly see the similarities between Twin Peaks and Deadly Premonition. It was in it's presentation, the music, the performances, the absolutely crazy personalities that each character has. Some fit typical stereotypes, theres a lot of ticked boxes. Whether it be one eyed girl, one armed man, mentally challanged older brother, wheelchair bound lady. It is kind of as if someone read the script said, "Yeah, that's seems pretty neat... one thing though, it'll be impossible to distinguish between girl x and girl y. How about we make them totally unique to the point of absurdity?". Not to say that it is in any way a bad thing, in fact without such individuality it would certainly have been so much harder to recognise one character from the next. I've just finished the end of the 3rd episode. The first season is rather short, only 7 episodes in total though thats because a pilot doesn't really count and it was an hour and a half. It's certainly been amusing, and surprisingly the fact that it was made over 20 years ago it is still very watchable. In fact if it was a modern day production it'd probably be plagued by hideous social networking references. The fact that there are no mobile phones, facebook or even internet make it almost pure. Within every episode thus far there have been several moments where you just want yell out "WTF!". I'm definately glad that I started to watch it, it provides a similar type of humour and style to that of Deadly Premonition which is wonderful cause it is so rare. The obscurities of it all just make it a pleasure to watch. If you liked Deadly Premonition and have some spare time I'd certainly recommend you to at least take a look at Twin Peaks. That being said, I haven't even finished the first season yet so perhaps I'm being pre-emptive on the whole affair.

So yeah, Mortal Kombat 9 is definately one of my favourite fighting games in a long time. It just has a plethora of things to do. Many of which I haven't quite got around to doing yet, and maybe won't ever. It is the fact that there is so much choice. For once the story mode is engaging, with intermittent cutscenes that provide humour, backstory and depth to some of the characters flawlessly transitioning into the actual fights. It's a great story mode...but then there is the challange tower, all the little minigames, the alternate costumes and artwork to unlock. It features a rather decent tutorial aswell. It simply feels like a solid purchase at full price, something that other fighters don't. But this isn't a review for Mortal Kombat. It leads up to my one major gripe. It's netcode. See now, I thought this was 2011. I thought that we should have had this down by now. Surely it should be a continual improvement, hell there was better netcode out there about 10 years ago. It stinks. Okay so, technically it is capable of giving you an online match that is playable, but for a very low percentile of people. It's just far too laggy for the majority of games. It makes it a painful experience to not be able to advance because by the time you see a projectile animation it's already too late to block it. Now, I'm not here to pretend that I am some sort of godlike MK player. I'm pretty darn bad, I don't even have a 1:1 win loss. That's not really the problem, the problem is that the terrible lag causes the fights to be boring, slow and practically comboless. If I beat someone, I feel bad for him because I'm sure it was just as laggy for him and I feel bad for me because I've learned nothing. I've not learned a single thing about fighting whoever he chose. It's the same whether I win or lose, I feel like I haven't learned anything and don't feel compelled to have a rematch because of the lag. Offline the game is great, when I meet it with friends and play it, I enjoy it - a lot. For ages I battled a Raiden, and just couldn't beat him. After time I figured it out, and now I have a decent shot against him. It's a rewarding learning process, that's what I want online to be. I want to play someone lose, then come at him from a different angle and experiment and figure out how I can suceed. Right now, when I play... I try to find someone who has acceptably little lag and hold on to and cherish them. I have a special place in my heart for the people who like me, know about 4-5 different characters at least semi-well and we can just mix it up for an extended period of time without any real lag concerns. Mortal Kombat has the potential to stay beside my Xbox for a long time to come, it all relies on the patch that is touted to be coming probably within the next month that will severely address the lag.

Perhaps with your help I can learn how to use parapgraphs next time - these walls of text are most intimidating. Thanks for taking the time to read, and if you have any questions, feedback or comments on anything at all post 'em below.
3 Comments