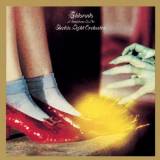 Thoughts On the Devil?

Ok, so I want to thank everyone who shared with me some of their thoughts. I'm going to update this post with another image, which goes further into the Five and Seven points that I was talking about earlier.
Now, to me, some of you seemed to come off as confused towards the meaning of this post. In all honesty, this was simply an idea going on of what type of responses I could get from people if I put up some words and an image or sets of images. The images deal with some current popular subjects (Religious, Biblical, satanic, conspiracy theories, mythology, and so on...). I organized and lined them up how I wanted, inverted the B&W on some images, and inserted titles and subtitles around them.
The images only represent what the person viewing wants them to represent. I understood that if I injected certain types of images, I could potentionally get a certain reaction from people. Mostly also to compare familiar symbols, shapes, and lines, and the ideas or "connections" that could appear before another person after viewing these images. An example of this are the seals of the American $1 note, as these two images have had a sudden burst of interest in certain groups and popular culture.
As I add the third image, I'm hoping you receive further personal meaning from this exercise.
ORIGINAL POST:

Cos the mods don't like my freedom of speech and freedom of lunacy. :(
So here are some images for those who "follow" me. Also adding this to the Off-Topic (Because that's where OFF TOPIC DISCUSSION GOES) in hopes that more people will come in and share with me their views on God, the Sun, and the Stars, and sun worship. I would more or less like to hear your opinions on what is commonly referred to as "the Devil".

First of all, these images have nothing to do with the Illuminati. So don't even come in with your Illuminati voodoo and 4chan pix.

These images concern:
1. The Devil
2. Adam (Eve) and Adam
3. Lucifer (The Devil, Satan, the light bearer) Morning Star, Son of Dawn
4. The Serpent (The Devil)
5. The Serpent (The Dragon)
6. The Sun God, The Sky God
8. The All Seeing Eye (The Sun, The Star)
9. Baphomet (The Devil, with Templars, with Pentagram, with Hexagram)
10. Hexagram and the 7 Points (Saturn, Jupiter, Mars, Venus, Mercury, Moon, and Sun) Pentragram and the 5 Points (Earth, Water, Wind, Fire, Spirit)
11. The Great Pyramid, and the All Seeing Eye (The Sun)
12. The Rising Phoenix and the Hexagram made of solid Pentagrams (The Sun)
13. The Swastika (The Spiral) within the Hexagram (the Seven Points), The Spiral within the Sun, the Swastika within the Hexagram

Also, the phrase NOVUS ORDO SECLORUM = New Order of the Ages (Beginning the true age of Aquarius, or the Third Stage) NOT "New World Order".
In a later post or edit, I'd like to get further into the 7 Points, the 5 Points, the Swastika, and especially the Crescent and Star (Sun).

If you still feel like being a jerk and want to go all Illuminati on my ass, you can draw a Star of David over the Pyramid and a Pentagram on the Eagle.

P.S.
I've been playing Metroid a lot. I have heard people say that Metroid is outdated and has not aged well, but those people are freaking crazy. This game still holds up, and I must say, it is a lot better than Kid Icarus (in sound, graphics, gameplay) in my opinion. I mean, Kid Icarus is good in its own way, but I find Metroid to be the better game.
Tho I do love me some crab walking Pit when you hold down. Looking forward to Other M.